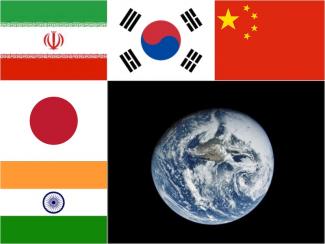 The world is facing various challenges owing to the ongoing Covid-19 crisis and it appears that this threat is not going to get over, at least in the near future. The world is slowly learning to adapt to this new reality. Some states are found doing well (in a relative sense) and are getting tuned to work under the shadow of the Covid-19 menace. Initially, various social sectors and sectors of the economy were finding it difficult to operate under the current crisis. Apart from the medical and pharma sectors, one other sector was the educational sector, which quickly found a way to reorient itself. Today, digital platforms have become a reality for survival for the educational sector. The initial phase of the pandemic was difficult mainly for industrial sectors since close human interaction was essential for maintaining various production cycles. Sports is another field where people have opted to perform by largely remaining under bio-bubbles. Even Olympic Games were held successfully, giving a message to the world that life can still go on despite the Covid-19 crisis.

There are a few sectors where some countries have performed exceptionally despite the present crisis, and one such sector is the Space sector. In fact, during the last two years, it is not only the state-driven space programmes that have made significant headway, but private agencies like Space X, Virgin Galactic and Blue Origin have made their mark. They have ensured that space tourism becomes a reality. NASA’s ambitious launching of the James Webb Space Telescope (JWST) has only become a reality in the Covid-19 phase.

Broadly, apart from the private players, two states which could be viewed to have dominated the Covid-19 period, with the success of their space programmes, are namely the US and China. Compared with the major space players like the US, Russia and the US, China is relatively a late-bloomer in the space sector. But, they have done a lot of catching up successfully. Their performance has been particularly spectacular during the last two decades. In the Asian context, when various space players have not been able to do much during the Covind-19 crisis, it would be interesting to check on China’s progress.

The US (NASA) has been a big spender in the space domain for a long, and China can't match with the US. However, it appears that China has identified some specific areas for investments and are found making very systematic progress. Moon and Mars programmes and establishing a space station appears to be China’s goals for the first few decades of the 21st century.

China’s Moon orbiters Chang’e 1 and Chang’e 2 were launched respectively on October 24, 2007, and October 1, 2010. They started their robotic landings on the Moon surface with a lander and rover system with Chang’e 3 & 4 missions. Chang’e 3 did a successful landing on December 14 2013, and on January 3 2019, China’s Chang’e 4 successfully landed on the far side of the moon. Chang’e 4’s rover and the lander was supposed to operate for 12 months and three months, respectively. However, the system is still functional and the rover (called Yutu 2) has travelled a distance of almost one kilometre on the Moon’s surface. Yutu 2 has set a new longevity record for a rover working on the surface of the moon, bettering the earlier record of 321 days set by the Soviet Union's robotic Lunokhod 1 rover (1970-71 period).

China’s Mars mission has been outstanding. Tianwen-1 was launched on July 23 2020 and its lander and Zhurong rover landed on the Martian surface on May 14 2021. The rover has already travelled a distance close to 1.5 KM. The data generated during the missions to Moon and Mars would be of great relevance to plan the future human missions to those planets. All this happening during the Covid-19 phase indicates that China’s Planetary Exploration programme is making good progress.

Currently, China is building its Space Station called Tiangong in Low Earth Orbit (LEO) between 340 and 450 km above the Earth’s surface. Since 2011, China has launched two prototype space stations to learn and gain experience. The first module for building the actual space station was finally launched on April 29 2021. This core module is called Tianhe, and two more modules will be launched by the end of 2022 to complete the space station. To establish this station, China has planned multiple crewed and un-crewed missions. China’s 7th crewed mission Shenzhou 12 successfully undocked from the Tianhe core module on September 16 2021. The 8th crewed mission Shenzhou 13, was launched on October 15 2021. At present, three astronauts (China calls them taikonauts), including the first female astronaut to the space station, are in space working towards the building of this space station.

The Long March series of rockets have played a significant role in China’s success in space. On December 10 2021, China undertook the 400th launch mission of this rocket. This rocket has been in service since 1970 and has carried out more than 92% of China’s space missions so far. One interesting statistic about the services provided by this rocket indicates that it took 37 years for China to complete the first 100 launches of this rocket. The following 100 launches took seven years, and 100 subsequent launches happened in around four years.

Interestingly, it took only 33 months since March 2019 to undertake the last 100 launches. Obviously, there are various variables responsible for the increase in the number of launches like requirements, commercial aspects, a sharp increase in the number of members in the rocket family (post-2000, new variants from Long March 3 series onwards to Long March 11 are put in service) and building of new launch pads. Still, it is important to note that during the Covid-19 period, China has undertaken almost three launches per month.

In 2021, besides the earlier missions, China undertook various other important missions to improve its commutations, remote sensing, and other capabilities. The following table indicates details of rocket launches for Asian states during the year 2021:

The US did 51 launches during 2021, while Russia could manage only 25. So, for 2021 China has achieved a world rocket in respect of undertaking maximum rocket launches in a year. Remarkably, this is not the first time China has achieved this distinction. They had topped the list in 2018 (39 launches) and 2019 (34 launches). While during 2020, China had launched 39 rockets, compared with 44 launched by the US.

During 2007-08, Japan and India launched their missions to Moon called SELENE (Kaguya) and Chandrayaan 1. Since these missions coincided with China’s first Moon mission, a debate started about the Asian space race. Subsequently, during 2013-14, India had launched its mission to Mars, which was a significant success. China had attempted to reach Mars by sending a mission called Yinghuo-1 in 2011. However, this mission had failed. Few analysts claim that India is a front runner in this race. But, they conveniently overlooked the fact that China’s first Mars mission failed to owe to the complications with the Russian probe to which the Yinghuo-1 probe was working in tandem. This mission was launched by Russia.

It is important to note that states like India and Japan have their own space programmes based on their own requirements and capabilities. It is not in the interest of these states to show them in some sort of a race with China just to raise some hyper-national feelings. There are some analysts outside Asia also who are arguing on similar lines. States like India need to be careful and avoid getting carried away by such talks and only plan what is doable and required in the national interest. China’s performance in the space domain has been stellar, pandemic or no pandemic, and that is the reality.