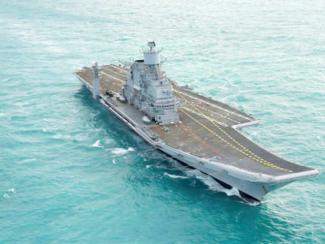 Two Russian built warships with the same name i.e. Admiral Gorshkov have been making news in the last few weeks. The first vessel is an aircraft carrier which was sold to India in 2004 and is rechristened as INS Vikramaditya. It has been plagued in controversy due to costs and time overruns. The pre-delivery trials of the ship were unsuccessful and according to reports, the vessel will have to wait till the White Sea ice melts during the summer of 2013 to complete the trials. During their meeting in New Delhi earlier this month, the Russian defence minister had assured his counterpart that INS Vikramaditya would be handed over to the Indian Navy in the fourth quarter of 2013. Although the Indian side is disappointed and had contemplated invoking the penalty clause, it was decided that the Indian Navy should keep a skeleton staff onboard and wait for the next summer to conduct sea trials.

The second vessel with the same name i.e. Admiral Gorshkov is a stealth frigate of the Russian Navy. It is the lead ship of Project 22350 and the first indigenously designed and built-in Russia vessel for the Russian Navy since 1987. After its trials in the Barents Sea at the end of November 2012, it will join the 14th ASW Brigade of the Northern Fleet. The stealth features of the frigate are derived from its superstructure which is made from composite materials and can absorb or reflect radio waves to ensure it is invisible to the enemy. The vessel is fitted with a 130-mm gun mount, 16 anti-ship Onyx missiles, 16 anti-submarine Kalibr-NKE missiles, Polimer-Redut surface-to-air defence system, and a Ka-27 helicopter for ASW missions. Its engines are more efficient and can deliver superior acceleration. However, the Russian Navy may face severe crew shortages.

The above events are a mere coincidence and the ships belong to different navies; perhaps what merits attention is that these are capable of operating in the harsh conditions of the Arctic. Further, the issue needs to be analyzed and viewed as an opportunity for the Indian Navy. It is argued that the delay in the delivery of INS Vikramaditya offers enormous prospects for the Indian Navy to develop Arctic ‘sea legs’.

As is well known, the Arctic ice is shrinking and during summers in 2011, 34 commercial vessels carrying 820,000 tons of cargo sailed through the Northern Sea Route (NSR). These were escorted by ice breakers. It is believed that by 2015, the Arctic will be ice-free during summers and there will be more such voyages. The NSR is expected to cut the sailing distance between Yokohama (Japan) to Rotterdam (Netherlands) by nearly 5000 nautical miles and saving approximately 10-15 days of passage time. However, the route is still underdeveloped due to lack of charts, navigation aids, lack of port infrastructure for repairs, and the search and rescue resources are still to be developed.

While the commercial viability of the NSR is being augmented, the Arctic littorals are developing a military capability for ‘ice condition’ operations. Russia has announced plans to widen the operational areas of the Northern Fleet and shift the focus of the military strategy toward the northern latitudes to protect Russian national interests in the Arctic. It plans to constitute an Arctic battalion for operations in the harsh climatic conditions. Likewise, Norway has plans to form military units for Arctic operations. Canada too is contemplating similar forces, while the US is still to announce its military deployment plans. It will be useful to recall that during the Cold War, the US and Soviet submarines operated under the ice cap and the strategic bombers had conducted deterrence patrols over the Arctic. In essence, there is a strong element of continuity from the Cold war though at a very low level.

There is a growing Asian interest in the Arctic region and China, Japan and South Korea are actively engaged in strategizing the usage of the NSR. They are striving to become permanent observers in the Arctic Council and broaden their understanding of the dynamics of the region. None of the above countries possesses Arctic naval capability and would in due course be tempted to develop it keeping in mind that the Arctic sea lanes will be vulnerable to a variety of political and strategic uncertainties. Perhaps, a Chinese articulation that in the Arctic region, even non-arctic states must enjoy the freedom of navigation merits attention. There are reports that the PLA Navy may be planning to develop the capability for launching missiles from under the ice cap using its SSBNs that are under construction.

However, it is only India that can potentially develop the naval capability for the Arctic region. The delay in the delivery of the aircraft carrier can be a unique opportunity to train Indian Navy crew and also develop ‘Arctic sea legs’. At this juncture, it will be useful to recall that INS Chakra, a nuclear submarine acquired from Russia on a ten-year lease, had apparently encountered severe ice conditions and snowstorms. Its crew had successfully negotiated these and now has some level of ‘ice condition operations’ capability. It remains to be seen if the Indian Navy is able to capitalize on this opportunity.