Bird Flu: The Next Pandemic? 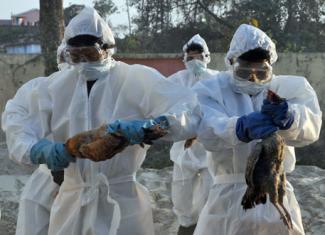 The world is still recuperating from the onslaught of the severe acute respiratory syndrome (SARS) that killed 774 persons and spread to almost every corner of the globe in 2003-04. The World Health Organisation (WHO) warns that we are again closer to experience the next pandemic, Bird Flu (Avian Influenza). David Heymann of WHO recently observed that the ‘world is at great risk of a new pandemic of deadly bird flu, but is ill prepared to handle it’. Another senior WHO official, Klaus Stoehr on the sidelines of the Inter-Science Conference on Anti-microbial Agents and Chemotherapy (ICAAC), urged governments, pharmaceutical companies and the science community to speed up production of anti-flu vaccines.

Avian Influenza or Bird Flu is an infectious disease of birds (water fowls) caused by type ‘A- strain’ of the influenza virus. The disease was first reportedly identified in Italy more than a century ago. In 1918-1919, a virulent flu pandemic killed millions of people worldwide. During a 1983–1984 epidemic in the US, the H5N2 virus, a subtype of A-strain, caused nearly 90% mortality in poultry within six months of the outbreak. During a 1999–2001 epidemic in Italy, the H7N1 virus, another virulent sub type of A-strain, more than 13 million birds died or destroyed within nine months of outbreak. The last pandemic was 36 years ago, the Hong Kong flu of 1968. It is observed that viruses of low pathogenicity can mutate into highly pathogenic viruses within a short period circulating among poultry population.

Now it is more or less determined that among the 15 or so different strains of the virus, the H5N1 strain is infecting humans and causing deaths. The first documented human infection occurred in Hong Kong in 1997, when the H5N1 strain, most virulent among all subtypes, caused severe respiratory disease that killed 6 people and affecting 12 others.

Last year in November, Thailand had first reported cases of what it calls chicken cholera. Soon after, at least nine Asian countries have experienced the bird flu outbreaks in its present incarnation. Some 31 people have died from the infection in 2004 in Thailand and Vietnam, and millions of poultry have died or been culled across Asia. In Thailand, with the death of a young girl on October 25, the total number of victim rose to 12. Currently, the bird flu virus has hit 280 areas in 41 provinces in Thailand. The last test results confirmed that the girl died in northern Sukhotai province had been infected with the deadly H5N1 strain. In Vietnam, altogether 19 people have died of the epidemic since outbreak. The country has suffered the worst outbreak of H5N1 bird flu so far in Southeast Asia. The type of bird flu that killed another person (20th victim) has yet to be formally identified. Investigations showed that close contact with live infected poultry was the source of human infection. However, the WHO has ascertained that there is no human-to-human transmission occurring so far.

The spread is not limited to humans and poultry alone. Bird flu virus has been spreading like a wild fire in most of the Southeast Asian countries, affecting dog, tigers and other animals. The virus was found in a dog and many tigers for the first time in Thailand. The Thai government killed 147 tigers at the Sri Racha Tiger Zoo where several tigers died from bird flu after being fed raw chicken, primarily to wipe out the bird flu virus.

Other Southeast Asian countries have been affected by the bird flu, are Cambodia, Indonesia, China, Laos, South Korea, Japan and Taiwan, virtually devastating the poultry industry. Even, looking at the trans-boundary spread, Malaysia has deployed troops in its border with Thailand to check smuggling of poultry into northern Kelantan state, even though Malaysia has yet to have a human infection of the disease.

Is South Asian countries prepared with this pandemic? Perhaps not. All south Asian countries are highly vulnerable to any kind of epidemic. During SARS, with media pressure the government of India had taken some precautionary approaches like checking at Air Port and other immigrant points. However, the emerging market in India, which attracts outside world, is susceptible to such type of infectious diseases. The most astonishing aspect was that the bird flu spread to Pakistan where some two million chickens had died due to the infection. Fortunately for India, it escaped from the wrath of the virus.

Despite the optimism of WHO members to have tackled SARS, there are all possibilities that it can crop up again. The growing environmental changes could trigger new variety of infectious diseases but in the developing countries where major chunk is poor. Half of the Afro-Asian countries are struggling with numerous existing known and mysterious diseases with very little care from the world community. Bird Flu will add another distress to them. Need of the hour is to be better prepared with preventive measures than waiting for the pandemic to happen.