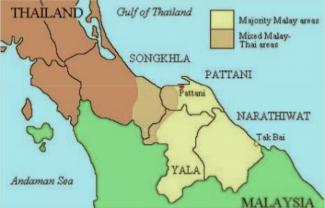 After the Thailand government’s rejection of civil rights groups demand to soften emergency decree in the three restive southern provinces, the security situation has been deteriorated further and tensions remain at all time high. The decree in question has become a source of growing fear and hostility between the populace in these violence-hit provinces and government forces since a state of emergency was clamped in July last year.

Thailand has been experiencing Islamic violence since early 2004. Incidents of shooting, ambush, bomb blasts in south Thailand, primarily in the Muslim majority areas of Yala, Pattani, and Narathiwat provinces have exposed the fact that the radical Islamic elements have dominated the strife-torn areas of Southeast Asia.

The bloodshed began on 4 January 2004 when an unidentified group attacked an army base in the Narathiwat province which killed four soldiers and the attackers fled away with more than 300 M-16 assault rifles. In response to the attack, the government deployed more troops in the region and imposed tough laws that gave the armed forces and police impunity in dealing with the situation. Despite this, the country had witnessed its bloodiest day on 28 April that year, when more than 120 Islamic militants were killed. After a period of relative calm, violence erupted and spread after Thai troops broke up a protest by thousands of Muslim youths at Tak Bai in Narathiwat on 25 October that resulted in some 80 deaths. Over 1,000 people have died so far in these three Muslim-dominated areas; in an otherwise predominantly Buddhist country and Buddhists have been bearing the burnt.

The ongoing violence and separatist movement have been spearheaded by Pattani United Liberation Front (PULO), a major Muslim separatist movement in southern Thailand, formed in 1968 by intellectuals educated from Pakistan and the Middle East. Since 1993 PULO has launched intensive attacks on Buddhist temples, schools, government establishments and army patrols. Other Muslim separatist groups like Barisan Revolusi Nasional (BRN) having leftist leanings is also trying to gather support in southern Thailand. As the members of the BRN have dual citizenship, they are active across the border in Malaysia and Thailand. Also, the radical Pattani Mujahideen Movement (GMIP) has been trying to garner support in the troubled region.

Thai government under Prime Minister Thaksin Shinawatra has been trying various methods to contain violence which included development funds, martial law and even incentives for army and police personnel to curb the violence. In October last year, the Prime Minister even threatened to raid villages supporting separatists while designating over 350 villages in the three provinces as “Red zones” (anti-government areas). He even pledged to give more than $ 519 million in assistance to villages countrywide except those in the red zone. This has elicited strong criticisms from the moderate Islamic leaders in the south because this is expected to push villagers closer to militants and thus pave the way for radicalism, facilitating international terror groups to gain a foothold in the region. Also, the role of the government forces has been criticized by human rights activists who have been advocating that the Thai government should place more faith in justice to end the anti-government skirmishes. The authorities have been blamed for a series of abductions and killings, and southern villagers say that they live in constant fear.

Experts have been speculating that this separatist violence could spread to the Thai capital Bangkok and to other provinces. There have been apprehensions that the situation might get out of hand if global actors get involved in the process. Reports show that few groups like PULO have been receiving funds from abroad.

However, in order to seek a peaceful resolution to the ongoing conflict, a National Reconciliation Commission (NRC) was created to suggest possible options to end the conflict. Though NRC has been scheduled to give its report in early 2006, its credibility is under scanner owing to the high handed approach adopted by the Thai government in resolving the conflict.

In such a situation the possible options in resolving the crisis can be localized talks and centralized decision making with all the actors involved in the negotiations. The more glaring issue is how to segregate the problem without getting Islamic organizations involved in the process who might very well exploit the problem to raise the issues of Jihad and Islamic resurgence. The identification of actors should be done at the earliest and there should be a third party mediated ceasefire between government and separatists which would in a way give time for both the government and the separatists to iron out their differences and seek long term solution to the lingering problem. Though it is stated that haste makes waste but in a volatile situation like southern Thailand one could say the sooner, the better.