Arms Dynamic and India: Not a Dubious Distinction Anymore 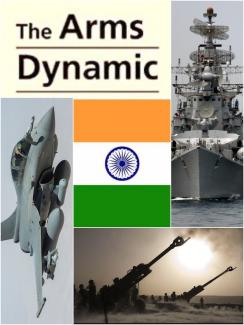 Stockholm International Peace Research Institute (hereafter, SIPRI), considered a comprehensive source of data on global military expenditure and arms transfers, in a recent press release (April 25 2022), cited India as the world's top five military spenders in 2021. India has surpassed UK and Russia and been ranked third in the list, spending USD 76.6 billion in 2021. It has been on the list of 'top five global military equipment importers' for the last two decades or more, while its total annual military expenditure has figured in the list for the first time. At a time when India is striving hard to reduce its import dependency, thus coming out of the embarrassing 'weapons merchants' paradise' tag and aspiring to become a global arms exports hub, its major hard power indicators like military budget, as reflected by SIPRI, would obviously come under closer scrutiny by major powers as well as others. Influential constituents within the developed world, adhering to 'guns vs. butter' narratives, will yet again be at the forefront in accusing India of spending too much on the military while neglecting human development efforts. Among others, books like India's Ad Hoc Arsenal: Direction or Drift in Defence Policy by Chris Smith (Oxford: Oxford University Press; 1994) and Arming Without Aiming: India's Military Modernization by Stephen P Cohen and Sunil Dasgupta (Washington, DC: Brookings Institution Press; 2012) typify western thinking on Indian hard power.

As per SIPRI estimates, global military spending has defied pandemic logic and witnessed a 0.7 per cent increase over the previous year. Trends for the last four decades suggest that it had reached USD 1.26 trillion at current prices in 1987, when the Cold War had reached its apex. It went down to USD 762 billion in 1996 (the impact of the end of the Cold War was visible then) and started rising again to reach the Cold War high in 2007. An upward movement in global military expenditure has continued since then. The increase, pandemic notwithstanding, has been moderate since 2015. It may see an unprecedented increase in coming times as the war in Ukraine continues and touch USD 3 trillion in the next six to seven years. If current instabilities in various parts of the world start worsening further, even a substantial increase would be considered the 'new normal. Countries like the US, Russia, China and even countries from Europe would drive this increase in the near future. It is not only undesirable but also worrisome, to say the least.

Military efforts – resources allocations, equipment sales and purchases, R&D expenses, etc. – by states have shown great contrasts and inequalities, at least ever since the modern state structure came into being after the Treaty of Westphalia in 1648. Inequalities in hard power existed before as well. It sharpened during the Cold War period as both superpower blocs – the US and the then USSR – were engaged in an arms race that came to a halt in the late 1980s when a series of events unfolded that brought down the Iron Curtains and ended the Cold War. It was then argued that military efforts by states would decrease and result in what is referred to as a 'peace dividend'. It happened during the period 1989 and 1997 when the so-called peace dividend resulted in drastic cuts in military expenditure by major states. Interestingly, the drastic cuts by Western powers had resulted in a massive consolidation of arms industries, which in turn resulted in a cyclical upsurge in arms exports again since the late 1990s. It may further be argued that global military expenditure did not rise after 9/11 but had started much before, thus demolishing the peace dividend narrative. The spending spree showed some signs of stagnancy during and after the global financial crisis in the late 2000s, but it was short-lived once again primarily because major arms producers did precious little to reduce their arms production efforts. Instead, they went full throttle in expanding their supplies to willing buyers. The famous often cited farewell speech of former US President Dwight Eisenhower on January 17 1961, emphasized the power of conscious global citizenry as the only solution to check the 'undue influence of the military-industrial complex' (MIC – the term was coined by Malcolm Moos, who had written Eisenhower's farewell speech), has even lost its colloquial meaning now. The world does not appear to show any sign of deceleration in arms production and trade.

If the recent ideational expressions by top Indian leaderships are of any indication, India of late has shown overt intent to increase its hard power attributes – a trend that started in the early 2000s and has only grown in qualitative and quantitative aspects. India's full-scale military modernization gained momentum after the Kargil conflict in 1999, coupled with a wide range of reforms in the military sector, and has shown no sign of deceleration in the last two decades. However, a closer look at India's military efforts would denote two pointers – a) sudden upsurge in military spending has been more of a 'arsenal replenishment' than real growth in military capacities, and b) reforms in the military-industrial sector have seen more 'disruptive' in contours and processes as large procurement budgets were executed in a much slower pace than otherwise warranted. These two factors, along with India's inabilities to balance the revenue (salaries, administrative expenses, etc.) and capital (equipment purchases) expenditures, have resulted in a situation that has further propelled the western narrative of 'arming without aiming' or 'ad-hoc arsenal' build up. India still spends much less than what US or China spend, its military expenditure to GDP ratio of less than 2 percent is much less in comparison to all big and aspiring powers taken together. Real expenditure in both constant and current prices is much lower than what has been projected by SIPRI and others, as argued long ago by noted scholar G Balachandran in his seminal piece in Conventional Arms Transfers (New Delhi: Institute for Defence Studies and Analyses; 1995). Most publications emanating from India on hard power attributes procure their data from sources like SIPRI, which invariably leads to erroneous assumptions. Narratives aside, one may ponder how India's almost stagnant military expenditure for the last half a decade has still been able to meet its security challenges in real (long military stand-off with China) and subjective realms while engaged in a multi-year military modernization programme.

There appears to be a symbolic transition for India from being one of the 'top five military equipment spenders (importer)' to the 'top five military spenders' in the world. While the former is addressed through various initiatives like Make in India, self-reliance in defence, strategic partnerships, and more resources for domestic manufacturers, the latter tag symbolically or otherwise has announced its arrival on the global stage.

The article is part of Defence and Security Review (DSR),  Volume 2 (No.4), MAY  2022. The issue also has briefs: 1) India's Tryst with Semiconductor Manufacturing and 2) Locating Europe in India's Strategic Calculus. Views are personal.