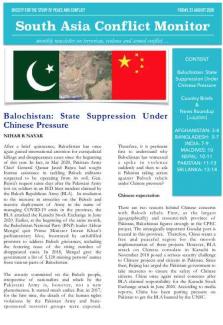 After a brief quiescence, Balochistan has once again gained international attention for extrajudicial killings and disappearance cases since the beginning of this year. In fact, in May 2020, Pakistan Army Chief General Qamar Javed Bajwa had sought Iranian assistance in tackling Baloch militants suspected to be operating from its soil. Gen. Bajwa's request came days after the Pakistani Army lost six soldiers in an IED blast incident claimed by the Baloch Republican Army (BLA).  In retaliation to the increase in atrocities on the Baloch and massive deployment of Army in the name of managing COVID-19 crisis in the province, the BLA attacked the Karachi Stock Exchange in June 2020. Earlier, at the beginning of the same month, the Balochistan National Party (BNP) leader Akhtar Mengal quit Prime Minister Imran Khan's parliamentary bloc, frustrated by unfulfilled promises to address Baloch grievances, including the festering issue of the rising number of disappeared cases. In 2018, Mengal gave the government a list of 5,128 missing persons' names from various parts of Balochistan.

The atrocity committed on the Baloch people, irrespective of nationalists and rebels by the Pakistani Army is, however, not a new phenomenon. It started much earlier. But, in 2017, for the first time, the details of the human rights violations by the Pakistan Army and State-sponsored terrorist groups were exposed. Therefore, it is pertinent first to understand why Balochistan has witnessed a spike in violence suddenly and then to ask is Pakistan taking action against Baloch rebels under Chinese pressure?

There are two reasons behind Chinese concerns with Baloch rebels. First, as the largest (geographically) and resource-rich province of Pakistan, Balochistan figures strongly in the CPEC project. The strategically important Gwadar port is located in this province.  Therefore, China wants a free and peaceful region for the smooth implementation of these projects. However, BLA attack on Chinese consulate in Karachi in November 2018 posed a serious security challenge to Chinese projects and citizens in Pakistan. Since then, Beijing has urged the Pakistani government to take measures to ensure the safety of Chinese citizens. China once again raised concerns after BLA claimed responsibility for the Karachi Stock Exchange attack in June 2020. According to media reports, China has been putting pressure on Pakistan to get the BLA banned by the UNSC.

Second, as a mineral-rich province, China wants to tap the natural resources of the area without any local resistance. Chinese companies are engaged in mining activities in this region since 2002. In July this year, the Pakistani government renewed the contract of a Chinese mining company for a further 15-year period. Media reports indicated that Pakistan allowed MCC Resources Development Company of China to operate Saindak copper-gold mine in Chagai district of Balochistan till 2035. The company will invest $45 million to explore copper and gold in the East Ore Body area of the town where some 278 million tons of deposits are estimated.

Pakistan has stated that it earned $2 billion from the project between 2002 and 2017. The decision has angered the Baloch people who claim that China has been usurping their province's mineral resources. On the other hand, the revenue generated from the mining activities does not utilise for local development.

Balochistan is the poorest and oppressed province of Pakistan. Around 75 per cent of Balochistan's population remain in rural areas. The literacy rate of the region stands at 41 per cent, and urban unemployment is at over 12 per cent. The low human development indicators reflect that the local Baloch population is not benefiting from the revenue generated from the Chinese operated mines. The people also argue that they were not consulted when the decision to build the port was taken and that a major part of the revenue from it will fill the coffers of the central government while the province will receive only a minor share of it. During the implementation of the CPEC project, the Balochis alleged that the locals were hardly recruited in the project works. Brahamdagh Bugti, leader of the Baloch Republican Party living in exile in Switzerland and who is also the grandson of slain nationalist leader Nawab Akbar Bugti, observed lately that Chinese economic projects in Balochistan were aimed at "colonising" the province, and must be resisted.

Suppression by the State

Unfortunately, Islamabad interprets Baloch local people's grievances against State and the Chinese exploitations as a separatist movement.  The BLA is declared a terrorist organisation by Pakistan. The same is endorsed by the UK and US. The Pakistani State's approach has been to suppress the movement by engaging the Army and radical islamist groups to neutralise senior Baloch leaders, youth activists and journalists, who have been reporting on Baloch issues. In February 2020, Balochistan witnessed three attacks that killed nearly 30 people. Since Islamabad does not want to internationalise the issue, it has conveyed to Beijing that the movement would be controlled by military means.

The number of youth disappearances and missing cases have doubled in the last six months. Going by the reports in the social media and online portals run by the Baloch diaspora, there has been a spike in military operations in Baloch like in Kech, Panjgur and Awaran districts since March 2020 onwards. These areas were reportedly shelled by helicopter gunships and massive raids were carried out afterwards. In April alone, in the military raids, 16 Baloch were killed and as many as 73 people were picked up by the Pakistani forces, including students, women, children and infants. On the day of the Eid-ul-Fitr this year, relatives of Baloch missing persons chose to assemble outside Quetta press club and staged a hunger strike demanding the early return of those missing.

Since the CPEC project is strategically important to China and economically beneficial to Pakistan, Imran Khan Government may go to any extent to ensure smooth implementation of the CPEC projects. But PM Imran Khan does not want to see the UNSC declaring the BLA as a terrorist organisation in order to avoid internationalisation of the issue.  The current military means and targeted killings of Baloch leaders to resolve the unrest could worsen the conflict. Therefore, the international community should put pressure on Pakistan to hold dialogue with the Baloch rebels and ensure local people's participation in the economic development of the region.

[The article is part of South Asia Conflict Monitor, AUGUST, 2020.]