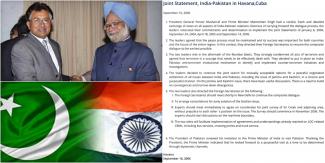 The recent Havana initiative by the Indian Prime Minister Manmohan Singh depicts a marked shift in India’s Pakistan policy. Manmohan Singh at Havana had announced on the sidelines of the NAM (Non-Aligned Movement) summit that India and Pakistan are proposing to handle the threat of terrorism jointly. This novel concept of resuming formal peace negotiations with Pakistan (frozen after 11 July Mumbai train blasts) and setting up of a joint agency to tackle terrorism appears to be an ‘atypical’ step as compared to the earlier ‘cautious’ approach. It seems that the Indian Prime Minister is taking a calculated risk may be because he understands that only the strategic moves arising from such paradigm shifts can bring about decisive progress away from illusions of ‘normalcy’.

Before Prime Minister’s Cuba sojourn it was generally perceived that both the leaders would exchange pleasantries and may perhaps issue routine rhetoric declarations. Nevertheless, both the leaders defied these ‘low hopes’ and surprisingly came out with a major policy initiative that too on the sidelines of the NAM summit.

Many questions arise out of this bold initiative. First, why India is giving a clean chit to the proliferators of terrorism who have constantly sponsored terrorist activities in India since 1988? Second, knowing fully well that a Pakistan-based group, Lashkar-e-Toiba, engineered recent Mumbai bombings, how one can believe Pakistan so easily? Third, what will happen to this India-Pakistan institutional mechanism to identify and implement counter-terrorism initiatives and investigations if one more major terrorist attack takes place on the Indian mainland in the near future?

Time is not yet ripe to get the answers to all these questions and it could be too premature to come to a definitive understanding of the rationale behind this move. However, it could be of some interest to analyze, that what on the ground has actually changed after the attack on the Indian parliament in 2001 and why India is now planning to conduct joint surveys of Siachen along with Pakistan with whom we fought a bloody war only a few years back on the same terrain?

India has continuously argued that terror groups in Kashmir and beyond are continuously getting outside support and logistic assistance from Inter Services Intelligence (ISI). India understands that Pakistan is a theocratic state and the prime motive of ISI is to create religious polarization of Hindu and Muslim communities in India.

The concept of anti-terrorism cooperation mechanism with Pakistan’s ISI was mooted a long time back by the Clinton administration but was refused by P V Narasimha Rao. Until now, India has established collaborations on terrorism with many countries. However, particularly with Pakistan, it looks that problem areas will surpass the areas of collaboration. The most sensitive aspect of any such collaboration would be the arena of intelligence sharing. It is a different problem altogether that how India should expect to authenticate the information from Pakistan regarding say, the groups’ operative in POK. The major thaw in this agreement could be the acceptance of ‘proofs’ given by both sides. Should India expect Pakistan to accept its evidence on Dawood? At this stage, there are many unanswered questions.

What could have really prompted the Indian state to go ahead with such an agreement? Is the ‘nuclear deal’ so important for India that it would not even mind sleeping with the enemy?

Conversely, it could be argued that India has understood that in spite of holding Pakistan responsible for each act of terrorism nothing much has been achieved over the years. Using security forces to tackle the menace of terrorism could only give short-term success. India is far away from finding the actual solution to the Kashmir problem. The world (read the US) is still not ready to hold Pakistan by its collar because of geopolitical realities and political compulsions. At the same time, terrorist outfits within the country are growing and the era of ‘imported terrorism’ is slowly getting help from the ‘homegrown terrorism’.

In addition, it may not be possible to sustain the bullish attitude that ‘every act of terrorism taking place on Indian land is fully orchestrated by Pakistan and India should hold Pakistan responsible for every such act’. So, may be taking an entirely different approach and engaging Pakistan constructively on issues related to terrorism will help India to reduce the trust deficit with Pakistan. The proposed mechanism is expected to go into specific charges made by either of the countries and both the countries will jointly investigate these charges. It could be termed as a better way of dealing with the realities than generally trading charges against each other when something goes wrong either in India or in Pakistan. Until now, it has been observed that offensive postures are leading both the countries nowhere.

The economist in Dr. Manmohan Sing must have made the cost-benefit analysis of such a move and could have decided to take a calculative risk. However, at the same time, it is not expected that India will fall to suggestions like troop reduction over Siachen, etc. Such agreement, if handled tactfully, may even help to bring in the forefront the ‘real’ source of terrorism and prove it to the entire world the actual reality. However, Pakistan is also, not expected to get easily trapped. Actually, this agreement in its current avatar as of now is likely to help them to raise their stature from the ‘source’ of terror to the ‘victim’ of terror. At this stage, it appears that any such joint mechanism is likely to dilute India’s longstanding stand on cross-border terrorism.

Author Note
The author is a defence analyst based in New Delhi. Views expressed here are his own.
Tags
Havana, Pakistan, India, Terrorism, Threat, Lashkar-e-Toiba