Russia-Ukraine Conflict amid the "Fog" of WMDs 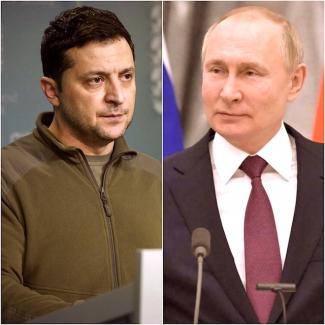 The Ukraine-Russia conflict is more than one month old now, yet there is no immediate solution in sight. Just before starting the invasion of Ukraine, Russian President Vladimir Putin had given a clear-cut 'nuclear' message to the world by mentioning that any western intervention would witness consequences the West had never seen or thought of before. Putin is systematically raising the Weapons of Mass Destruction (WMD) bogey over the last month. Traditionally, chemical, biological, radiological, and nuclear (CBRN) weapons are classified as WMD. Few analysts also consider missiles, the primary delivery platforms for WMDs, as a part of the larger WMD debate.

Currently, Russia is making various claims about the possibility of WMDs getting used in the Ukraine war theatre. Recently, Dmitry Medvedev, a former Russian president and deputy chairman of Russia's security council has, mentioned that Russia's nuclear doctrine did not require an enemy state to use such weapons first. It may be noted that Russia has the largest stockpile of nuclear weapons in around (could be around 6000 weapons). Earlier, the Kremlin has explained that Russia would only use nuclear weapons if there were an existential threat to its survival. The target audience for such statements is not only Ukraine but more so the West.

In early March 2022, the Russian ministry of foreign affairs had claimed that the US and Ukraine were running a secret military-biological programme inside Ukraine. As per them, their invading forces had discovered some evidence of an 'emergency clean-up'. There is a possibility that Ukraine agencies could have destroyed high-threat pathogens housed in their public health laboratories to prevent any potential spills owing to the ongoing conflict. This was a piece of advice given to them by the World Health Organization (WHO).

The US is known to be funding Ukrainian agencies to work on biosciences. This funding has its roots in the aftermath of the Cold War period. This funding is happening under the old Cooperative Threat Reduction (CTR) scheme. In present times, this scheme is referred to as biological engagement. CTR, or 'the Nunn-Lugar programme,' was put in place after the end of the Cold War (1991) to address the challenges emerging from the WMD programme of the erstwhile USSR, which had suddenly become an orphan. The purpose was to ensure the accounting, safety and security of various WMDs and their delivery systems in possession of the Soviets. Today, in the biological field, in the context of Ukraine, this programme has been extended towards undertaking the surveillance of diseases.

Russia successfully made the United Nations security council (UNSC) meet on 11 March 2022 to discuss this issue. But there were no takers for Russian claims that the US operates at least 30 biological laboratories in Ukraine and is experimenting on dangerous pathogens. It is important to note that Ukraine has reasonable bioresearch facilities. However, they do not have the Bio-Safety Level-4 (BSL-4) lab, which is required for undertaking intricate research projects. The Russian claim has been refuted by the US, and the Washington administration believes that possibly, the hidden agenda of Russia could be to create confusion and attack Ukraine by using biological weapons.

The US and their allies also have concerns that Russia could even use chemical weapons. They are basing their argument on the experiences of what had happened in the Syrian conflict. Post-2011, there have been some cases of Sarin and Chlorin being used in this conflict. In July 2012, Syria did admit it possessed chemical weapons. The Organisation for the Prohibition of Chemical Weapons (OPCW) played a significant role in dismantling Syria's chemical arsenal and conducted a detailed investigation about the incidences of use of chemical weapons in Syrian war theatres. However, Russia has been found at loggerheads with OPCW's investigations and is known for its soft corner for Damascus.

Being a signatory to the 1993 Chemical Weapons Convention (CWC), Russia was mandated to destroy its chemical weapons. By Sep 2017, the OPCW had announced that Russia had verifiably destroyed its chemical weapons stockpile. This indicates that Russia is officially not in possession of any chemical weapons. However, few incidences of Russian secret agents using the deadly nerve agent Novichok on a few individuals recently. Russian agencies were suspected of the poisoning of Sergei Skripal, a former Russian secret agent and his daughter in Salisbury, the UK, in March 2018. Again, in August 2020, Putin's political opponent Alexei Navalny was poisoned with the same substance. A couple of decades back, during the Moscow theatre hostage crisis of 2002, Russia resorted to using a mixture of Carfentanil (a fentanyl derivative) and remifentanil to flush Chechen terrorists out of a Moscow theatre.

Regarding the ongoing conflict in Ukraine, some unconfirmed sources have indicated that the Russian oligarch Roman Abramovich and two Ukrainian peace negotiators have suffered symptoms of suspected "chemical weapons" poisoning. These incidences indicate that Russia still maintains some capabilities to undertake a chemical attack. So, in the backdrop of all this, it needs to be analysed whether 'Russia will dare to use chemical or biological weapons in the ongoing Ukraine conflict?

Today, the so-called element of surprise has already withered away. Even if Russia decides to use chemical weapons (covertly), they know they would be immediately blamed. They understand that Ukraine and their friends have an edge on social media, and it would be very easy for these powers to build a global opinion against Russia quickly. More importantly, for the last one month, Russia has indirectly ensured that NATO would not militarily enter into the conflict. An act like chemical weapons usage may force NATO to take some offensive action.

The way this conflict has progressed during the last month, it appears that any isolated chemical weapons attack killing a few people would not help Russia achieve its military objective. As far as WMD messaging (to the West) is concerned, Russia has already demonstrated its capabilities in hypersonic missiles (with conventional warheads) by launching two such missile attacks on Ukraine. Obviously, these missile attacks have been carried out to ensure that NATO would not be able to raise the nuclear ante. Also, it suits Russia to continue debating on WMDs since it would help them divert global attention. They would be able to mount various offensives by using conventional weapons to achieve their much-delayed military aim.