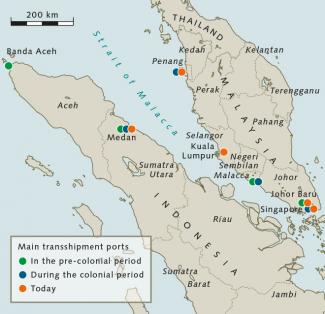 Two piracy attacks in less than a fortnight on Japanese flagged vessels transiting through the Malacca Strait have shaken up the government in Tokyo as also the national shipping agencies. On March 14, armed pirates in three fishing boats boarded a Japanese-flag ocean tug MV Idaten towing a large construction barge Kurooshia, for Myanmar in the Straits of Malacca. They kidnapped the Japanese Master and two engineers. Later, the Royal Malaysian police patrol boats escorted the tug and towed the vessel to Penang. Reportedly, the crew has been released but Japan's Foreign Ministry declined to say whether a ransom was paid.

In the second piracy attack, armed pirates boarded the Japanese owned Ocean Bridge bulk carrier in the Malacca Strait in Malaysian waters north of Port Klang. Reportedly, three pirates armed with guns and knives boarded the vessel and stole HK$156,000 from the vessel's safe. In this case, there were no hostages taken and all twenty-one Filipino crewmembers were safe.

Meanwhile, the Indonesian navy ship KRI Tedung Naga, and Malaysian navy ship KD Rencong collided off the coast off Borneo Island, an oil-rich maritime area claimed by both Jakarta and Kuala Lumpur. The Malaysian warship had earlier undertaken offensive manoeuvres in the area where Indonesian workers were building a lighthouse. This is not the first time that warships from both navies have been engaged in incidents at sea. There have been several close encounters since February 16 when Shell, an oil exploration giant, was given a concession by Petronas, a Malaysia's state oil company. Jakarta has argued that the blocks awarded by Petronas are outside Kuala Lumpur's sovereignty.

In order to tide over the problems and also keeping in mind that the two navies are under great international pressure to enhance patrolling against sea piracy in the Malacca Straits, the Malaysia and Indonesia agreed to de-induct their warships in the area to concentrate their efforts in the Malacca Straits. They also agreed to settle the boundary dispute over the area trough negotiations and are scheduled to meet again in May 2005.

These incidents have brought to fore the fractures in maritime relations between the two littoral states who have so far resisted US attempts to deploy Special Forces to counter-terrorism and sea piracy in the Straits of Malacca under the Regional Maritime Security Initiative (RMSI). There are very few naval assets now patrolling the Strait and it can be argued that the pirates are taking advantage of the poor naval presence and low intensity of patrolling.

The Japanese response to this spate of piracy attacks is understandable. The Japanese Coast Guards announced that they were considering dispatching patrol vessels and aircraft to the area if Malaysia made such a request. The Malaysians were quick to respond and Deputy Prime Minister Najib Razak, who is also defence minister, noted, "We will do whatever we can, but the principle of sovereignty has to be respected." Kuala Lumpur further noted that the security of the Malacca Strait is the responsibility of Malaysia, Indonesia and Singapore only.

It is evident that sea territory under the jurisdiction of a state is a national asset. Therefore, where the maritime border is located and who is allowed to transgress it is of concern to a state. The maritime boundaries have assumed considerable importance. The newly acquired maritime territories require constant policing and maintenance and states could do anything to safeguard their national interests. It is evident that the issue of sovereignty is extremely important to states

But a secure maritime environment can never be achieved by the efforts of a single country. It requires mutual understanding and cooperation of all the countries in the region, including neighbours. For that, it is necessary to start by sharing the common values on the benefits of regional maritime cooperation to be enjoyed by the whole maritime community. In this context, Japan and India are extremely well placed to support regional efforts to counter-piracy.

The frequent hijacking of Japanese merchant vessels prompted Japan to propose joint naval patrols in areas around the Malacca Strait in 2000. It sought cooperation from China, India, Indonesia, Malaysia, Singapore and South Korea. The Japanese government was keen to dispatch the Maritime Safety Agency (Coast Guard) ships to the Malacca Strait for anti-piracy operations. The vessels were expected to form part of the multi-national anti-piracy patrol comprising of coast guard and naval vessels of China, Republic of Korea, Malaysia, Singapore and Indonesia. This proposal was not acceptable to Beijing who viewed it as yet another Japanese step towards extending the strategic reach of its naval operations. The Japanese government has now begun to work with the South East Asian ‘troika’ (Indonesia, Malaysia and Singapore). The Japan Maritime Self Defense Force (JMSDF) is scheduled to take part in maritime exercises in the Malacca Strait with the ‘troika’

The‘troika’ navies and the Indian navy too have a highly developed maritime cooperation agreement that includes joint naval exercises, submarine training and bilateral exchanges. India and Singapore have been holding joint exercises for the past 11 years including the recently concluded SIMBEX in the South China Sea. Admiral Dato Seri Mohammad Anwar, Chief of the Royal Malaysian Navy, during his visit to India, had met the Indian Navy chief on September 7, 2004, and discussed the issue of security in the Straits of Malacca. India and Thailand are also negotiating similar agreements.

Singapore's Defence Minister had admitted that security along the Malacca Straits was "not adequate" and that "no single state has the resources to deal effectively with the threat." While the combined policing assets may able to counter ‘very-low-intensity’ threats like drug trafficking and human smuggling to some extent, the task of battling piracy and maritime terrorism is demanding due to the asymmetric nature of the highly nebulous threat. The capabilities of pirates and terrorists have increased manifold in the last few years, adding more lethality to their attacks. It is evident that the regional countries maritime capacity is grossly inadequate, especially in the context of surveillance of their respective maritime zones. The military maritime capability constitutes small ships without integral helicopters and their envisaged augmentation would involve an unacceptable lead-time. It is in this context, Indo-Japanese initiatives to counter-piracy are important. But, both sides must take the regional countries into confidence before engaging in ant bilateral exercises to counter piracy in the Malacca Strait.