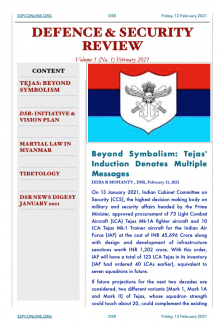 On 13 January 2021, Indian Cabinet Committee on Security (CCS), the highest decision making body on military and security affairs headed by the Prime Minister, approved procurement of 73 Light Combat Aircraft (LCA) Tejas Mk-1A fighter aircraft and 10 LCA Tejas Mk-1 Trainer aircraft for the Indian Air Force (IAF) at the cost of INR 45,696 Crore along with design and development of infrastructure sanctions worth INR 1,202 crore. With this order, IAF will have a total of 123 LCA Tejas in its inventory (IAF had ordered 40 LCAs earlier), equivalent to seven squadrons in future.

If future projections for the next two decades are considered, two different variants (Mark 1, Mark 1A and Mark II) of Tejas, whose squadron strength could touch about 20, could complement the existing squadrons of Sukhoi MK-I and future squadrons of Rafale fighters. Unless combat versions of unmanned aerial vehicles (UAVs) develop to make the bigger systems irrelevant, fighters of different classes will always have different degrees of relevance, including LCA. With progress in next-generation avionics, composite materials and a robust aero-engine, the LCA could well be considered a potential competitor to aerospace majors of the world. With enhanced production capacities to 16 per year by HAL alone, a possible combined public-private partnership model could produce 30 jets per annum, thus meeting emerging and existing export demands. Potential Indian aerospace majors include Tatas, Mahindras, and Adani Group, who have demonstrated their capabilities while existing listed companies like Dynamatic Technologies are embedded into the global supply chain.

The journey of India's indigenous fighter aircraft programme had started in the late 1950s with the HF-24 Marut programme, which was abruptly shelved in early 1960s. Consequent induction of fighters from the 1960s onward primarily consisted of different variants of MiG, supplied by Russia, in addition to existing fighter fleet procured from Western sources. The second phase of indigenous efforts in design, development and manufacture of fighters started in 1983 when the preliminary design of an LCA was approved. By mid-1990s, the design and development of LCA had slowed down. By the late 1990s, the project was criticised for technological inadequacy of all kinds, including inabilities to develop a stealth airframe and an indigenous aero-engine. For different reasons, the LCA project story has been a concocted misinformation campaign, including overlapping vested interests between competing foreign fighter suppliers, customer and the indigenous manufacturer Hindustan Aeronautics Limited (HAL). Flagship programmes like the Kaveri engine project did not yield positive results for years, leading to a long-held perception of India's inability to produce modern military systems. Most importantly, the state took a back seat in the internecine conflict. At the same time, foreign suppliers were happy minting money, and the customer was pleased to get imported systems with an inflated price.

HAL's fortunes plummeted consequently as not only the state became its bitter critic for some time, but more importantly, the manufacturer did not get requisite support from the customer throughout past decades. Amid criticism, the Modi government took a decision that not only re-energised the designer and producer but more importantly sent multiple messages to multiple stakeholders in this whole story. First, the Modi government accelerated the process of Initial Operational (IOC) and Final Operational Clearance (FOC) of LCA, which saw a grudging placement of order of 40 LCAs in 2016. It hauled up the entire design and development eco-system, whereby both designers and manufacturers were in sync with each other. Second, enhanced production capacity from 8 to 16 aircraft per annum made the first phase of acquisition in the shortest possible time, unprecedented in the history of military system acquisitions. While the first batch order for LCA came in 2016, the second batch came in January 2021.

Third, the government was serious enough to put in place a set of reforms in the national sector, where self-reliance became a central theme. In addition to indigenous production of equipment and services, exports were also encouraged. In addition to LCA, a bulk order of Arjun Mark 1A Main Battle Tank (MBT) for the Army is on its way. Domestic market apart, India is seriously looking at arms exports, for which even an exports policy has been formulated. Countries from South East Asia, Middle East and Indian Ocean Region (IOR) are seen as potential buyers of this jet. It is no surprise that the Indian Defence Minister Rajnath Singh will host Defence Ministers of 27 out of 29 IOR countries at the Aero Show 2021 in Bengaluru. The government has recently cleared approval for exports of 156 types of military systems.

Finally, the government is serious about reducing arms imports, thus saving considerable amount of money and increasing acquisition from domestic sources, thus encouraging the domestic military-industrial sector. If the Indian defence budget for Financial Year 2021-22 is of any indication, the capital acquisition allocations have not seen any increase from the previous year's revised estimates. However, if one looks at the allocations earmarked for the private sector in the defence budget and projected investments by the government in private defence industrial sector, it gives an imposing picture.

Tejas' induction into the IAF has gone beyond symbolism. If its future variants are of any indication, IAF could eventually receive the Mark II version, followed by possible induction of fifth-generation Advanced Medium Combat Aircraft (ACMA) in time to come. With such an ambitious landscape, Indian aerospace sector could get a new lease of life, which will not only take HAL to the next phase of evolution but also could propel large Indian private companies to get a slice of the domestic as well as exports market. In addition, more than 800 small and medium-sized industries could benefit from such a rosy scenario. Induction of future naval versions of LCA and different variants of combat and non-combat helicopters could complement the aircraft manufacturing locomotive in the future.

A determined state will lie at the core of military industrialisation of an emerging power like India. If the state will is there, attendant necessities like industrial eco-system, investments, and supply chain will fall in place. The Government's call for Atmanirbhar Bharat (self-reliant India) would be a challenge test case for the Indian aerospace industrial sector.