Forced Displacement and Mental Health: Status of Rohingyas in India and Bangladesh 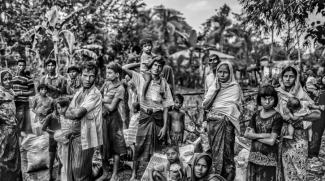 The Rohingyas, as described by UN Secretary-General Antonio Guterres, are "one of, if not the most discriminated people in the world." Native to Myanmar's Rakhine state, Rohingyas are a stateless Muslim minority. Myanmar does not recognize them as citizens and considers them illegal immigrants. According to the Human Rights Watch, various laws in place discriminate against them, including prohibitions on their freedom of movement, education, and employment. In August 2017, thousands of terrified Rohingyas entered Bangladesh's territory, a bordering country. They were fleeing the raging violence in the Rakhine state between Rohingya armed groups led by ARSA (Arakan Rohingya Salvation Army) and government troops. It was reportedly backed by local Buddhist mobs, burned their villages, attacked and killed civilians, and enforced brutality against girls and women. The Rohingya have been victims of targeted violence since the 1970s, with significant attacks or incidents in 1978, 1991-92 and 2016. But since 2017, the largest group of refugees have been living in Bangladesh's Cox's Bazar area. The clashes between Buddhist monks and the Rohingya Muslims date back to the 1950s. After Independence in 1948, the predominately Buddhist country denied citizenship to the Rohingyas. They were denied basic rights and systematically discriminated against, even in the predominantly Rohingya populated area of Rakhine state, Myanmar.

According to the Indian Home Ministry, around 40,000 Rohingyas sought refuge in India in 2017. Out of those thousands of refugees, only 16,500 are documented with the UNHCR. They face various issues in their own country as well as the countries they have fled to, the most important of all being healthcare. Access to shelter and food had become an issue at the beginning of the refugee crisis. The Indian government has always had the stand of deporting them to Myanmar as soon as their government was ready to give them legal status. They pose a threat to India's internal security, are illegal immigrants and should be deported, as was said by the then Minister of State for Home Affairs, Kiran Rijju. Currently, India is home to around two crores of illegal immigrants.

There have been nearly one million refugees in Bangladesh in Cox's Bazar since 2017. Though many refugees have been residing in Bangladesh for more than five years now, their living conditions are deplorable, with hardly enough food and poor shelter arrangements and almost no means of livelihood. In a study conducted in the later part of 2019, the Bangladesh government had stated no intentions of letting the Rohingya refugees stay for an unlimited amount of time or even thought about giving them legal status. There is pressure from within Bangladesh to ease the Rohingya refugee situation as well.

In a cross-sectional study conducted in Kutupalong and Nayapara refugee camps in Bangladesh, trauma history, environmental stressors and mental health outcomes for 148 refugees were examined. Results indicated high levels of mental concerns such as PTSD, depression, and somatic complaints. A review on the culture, mental health and psychosocial wellbeing of Rohingya refugees, based on earlier studies and research indicated that due to prolonged exposure to conflict and conditions of deprivation, the increase of the refugees' vulnerability to mental health issues such as PTSD, anxiety, depression and suicidal ideation are high. A study amongst 220 refugees in Malaysia was conducted to assess the prevalence of major depressive disorder (MDD), Generalized anxiety disorder (GAD) and PTSD. Results showed that the prevalence of GAD was 41.8%, PTSD was 38.2% and MDD was 32.3%. A cross-sectional study conducted in Bangladesh among 1184 Rohingya refugees found a high prevalence of mental health symptoms even two years after displacement. Out of 1184, 625 men were found to have severe Post-traumatic stress symptoms (PTSS), and 274 had moderate PTSS.

Since 1948, Rohingya have been fleeing to neighbouring countries due to persecution and conflict from their home country Myanmar, which to date refuses to give citizenship or any legal recognition. The racial prosecution has begun due to decades of longstanding friction between predominantly Buddhist Myanmar and the Rohingya Muslims over religious and ethnic issues and disagreements. Though they have fled their country due to conflict and fear for their lives, the living conditions in refuge countries are still not favourable for them. They remain stateless and without basic amenities. In all this turmoil and uncertainty, a big question must be answered about the long-lasting mental health effects of such conditions. UNHCR, the United Nations refugee agency, designed a programme to integrate mental health within refugee primary health care, using the Mental Health Gap Action Programme Humanitarian Intervention Guide (mhGAP-HIG) as the central tool. The objective was to provide mental health services through capacity building of medical staff in refugee health facilities to identify and manage people with mental, neurological and substance use conditions. Maximum studies have been conducted to examine symptoms of PTSD, anxiety, depression and suicidal ideation (SI) of the refugees. Still, until basic amenities like food, shelter and clothing are addressed, agencies willing to help these refugees cannot move on to the graver concerns of mental health disorders.