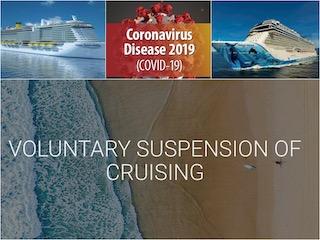 The Cruise Ship Industry around the world has been significantly affected by the spread of Coronavirus or infamous now as Covid – 19. Luxury cruise ships are more vulnerable to infectious diseases, as it brings diverse populations into close proximity, for an extended period of the sea voyage. There is a risk of spreading the disease beyond voyages also, for which aggressive efforts and safety measures are required to be implemented to contain the spread.

In early February, outbreaks were detected in a few ships, which were in their voyages in different parts of the world. Diamond Princess was the first ship which had a major outbreak on board; quarantined at the Port of Yokohama in Japan from February 07-23, 2020. Though the cruise passengers were told to maintain social distancing and monitor symptoms, however, the crew members kept moving around the vessel, in and out of passenger rooms, as they were at their duty, instead of isolating themselves in their cabins. Among 3,711 Diamond Princess passengers’ and crew, 712 tested positive for Covid-19.

During February 11-21 (2020), Grand Princess sailed for a round-trip from San Francisco on its Voyage-A.  Most of the crew and passengers from Voyage- A remained on board for Voyage- B from February 21 till March 07. During the second voyage, only a few crew members and passengers tested positive for Covid-19.

The Diamond Princess and Grand Princess had more than 800 total Covid-19 cases, including 10 fatalities. Diamond Princess outbreak happened among passengers before the quarantine was implemented, and it was apparent that the passengers disembarking from the cruise ships could be a source of community transmission. Hence, aggressive efforts were taken to prevent further transmission upon disembarkation. The Grand Princess was an example of transmission from the crew members across multiple consecutive voyages. Besides, several other cruise ships like Ruby Princess, the Oasis of the Seas, Zaandam, etc. started reporting Coronavirus positive cases among the passengers and crew members.

The novel Coronavirus, which started in Wuhan (Hubei province) in China, has now infected millions of people globally. At the time of writing (April 15, 2020, 9.00 IST),  there were 1,379,579 active cases globally with over 131,150 deaths so far. Over 20 cruise ships have had confirmed positive cases of Coronavirus on board, and over 6,000 passengers remain at sea on seven cruise ships.

In the past, cruise ships have faced a crisis like the Norovirus - causing a gastrointestinal problem, sinking of Costa Concordia and stranding of the passengers and crew at the Carnival Triumph for over a week. But the impact of Covid-19 could be the biggest challenge and appears to be creating a negative impact on Cruise Ship Industry on the whole. Fears within the industry are that the impact will affect sales for a long time, particularly for the Asian market, which has become an important market for cruise companies in recent years. There could be an impact on the Mediterranean market also due to the current situation in Italy. The European market will be vulnerable too with the spike in Corona cases in Spain, Germany, and other major European countries. Currently, CLIA – (Cruise Lines International Association) has called for the suspension of all operations to reduce the spread of the novel Coronavirus. The operations are suspended by various operators for varying lengths across the world. CLIA represents over 90 percent of the Cruise Ship Operators worldwide.

As per the information available in open source, an estimated 30 million passengers are transported on 272 cruise ships worldwide each year, generating an annual revenue of approximately $150 billion. Now the whole industry is on halt and uncertain about the immediate future. Many cruise operators have either suspended voyages or have changed their itineraries to cater to the ongoing restrictions by ports to dock their ships. The crisis is very large in scale for the industry, especially for those countries and people who rely on tourism for their livelihood, although Cruise Ship Operators have wide experience in dealing with such challenging situations in the past.

Though the CDC (Centre for Disease Control and Prevention) has given the go-ahead to sail in July; there is a concern if it’s still safe to cruise. There is a huge uncertainty on board, as cruise ships are ideal incubators of infectious diseases. During a current crisis situation, it was found that there were several cases of irresponsible behavior, lack of transparency and signs of unscrupulous practices from cruise ships mostly by hiding or covering up cases of Coronavirus infections on board and allowing to launch a voyage even after WHO (World Health Organization) declared the Pandemic emergency.

The past and present criticisms against the Global Luxury Cruise Industry that included damaging ocean eco-system, notwithstanding, it is most likely that the demand for cruises could bounce back in the future. As per the available information, many cruise operators have already started getting bookings for 2021 and the percentage is quite high as compared to bookings in 2019, in spite of present uncertainty. However, after the terrible Covid-19 response and followed by mismanagement of the situation risking passengers’ safety, the big question now before the industry is whether the passengers would wish to board again their dream cruise ships, or, not. But for now, all cruise operators should strictly follow the guidelines as advised by the CDC, WHO and the International Chamber of Shipping (ICS) to safeguard their passengers and crew members.