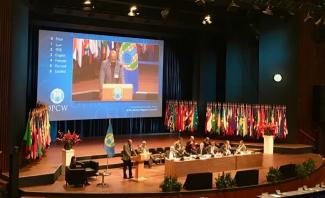 Presentation to the 23rd CWC Conference of States Parties (CSP) Organization for the Prohibition of Chemical Weapons, The Hague, The Netherlands, November 23, 2018

Mr Chairman, Director-General, Distinguished Delegates, Ladies and Gentlemen, It’s an honour to be present at the 23rd Conference of States Parties (CSP-23) and the 4th Review Conference of the Chemical Weapons Convention.

The Chemical Weapons Convention, in over two decades of its existence, has achieved more successes than setbacks. Among the accomplishments we have two very promising figures to boast of - one, that approximately 98% of the world’s population is now living under the protection of the convention and second, that over 96% of the world’s declared chemical weapons stockpiles have been safely destroyed under the watchful eye of the OPCW. There is, of course, a lot more to accomplish in the future.

Mr Chairman,
Amidst substantial success, the Convention and the OPCW have also faced numerous challenges. I would briefly like to highlight two events from this year that remain at the centre of debate within and beyond these walls. This April, the conflict zones of Syria witnessed yet another round of chemical weapon attacks in Douma that led to over 50 deaths and scores of injuries. So far, investigations of the two affected sites (Omar Ibn Al-Khattab Street and the Martyrs' Square) have found various chlorinated organic chemicals along with explosive residues.

Similarly, the events in Salisbury and Amesbury in the United Kingdom earlier this year highlighted another grave concern about the tactical chemical weapon stockpile and its use against vulnerable targets in a secured civilian environment. While accusations and counteraccusations over the use of so-called ‘Novice’ CW agents continue, the perpetrators still roam free, safe and beyond the grip of the international community, perhaps due to state support. As we speak here, they might just be seeking their next targets.

Mr Chairman,
I would also like to take this opportunity to draw your attention towards the threat emanating from jihadist terrorist groups that remain as grave as before. While 2018 has not witnessed any chemical or biological weapon use by terrorist groups, their propaganda machineries are working overtime to spread materials related to CBW terror. In July 2018, the pro-Islamic State (DAESH) media group, Al- Abd al-Faqir (AF), which is notorious for producing graphic videos of hypothetical jihadist attacks against Western countries, released a video depicting an imaginary biological terror attack. It also urged the so-called lone wolf extremists to strike terror in the West. This 5- minute audio-visual titled "Bio Terror" depicts bio attacks in the West, allegedly in retaliation for the indiscriminate chemical attacks on Muslim countries by Western states. While it accuses Western states of using chemical weapons, the video justifies its call for violence by acknowledging that while Islam prohibits mass casualty attacks, exceptions can be made to repel aggression and reciprocity.

The dangers posed by these Jihadi extremist groups and rouge, insincere nation states remain unchanged and are inciting new challenges every year for the OPCW and international community in general. There is an absolute need for sincerity and strong political will among major world powers to work together for the complete elimination of chemical weapons.

Mr Chairman,
I would like to take this opportunity to state that my organisation, Society for the Study of Peace and Conflict (SSPC), based in New Delhi, India continues to carry out research, advocacy and publishing towards better dissemination of information on subjects relating to the arms control and non-proliferation, along with conflict and counterterrorism issues. This year, we published briefs and papers on CBRN issues, including a policy paper on the threat perception and peaceful application of Ricin, a brief marking 23 years of the Sarin gas attack in Tokyo and the definitive action Japan took against the perpetrators of the subway chemical event this July. We also produced a report on the March 2018 Salisbury poisoning events and touched upon how this toxic mystery has deepened amidst blatant denials and blame games.

We are focussed to continue our endeavours to undertake similar projects for better information dissemination within the larger strategic community and for the benefit of the general readers.

Mr Chairman,
We are honoured to be associated with the CWC coalition, and I would like to extend special congratulations to Dr. Paul Walker for leading the coalition as a growing and cohesive unit that has vowed to offer invaluable contributions for the accomplishment of CWC’s objectives and to supplement the efforts of the OPCW in fulfilling its vision of a world free of chemical weapons. On behalf of my organization, I thank the OPCW and the CWC Coalition for this opportunity to speak at the plenary meeting.

Thank you, Mr. Chairman, and I wish for this statement to be included in the final CSP records and posted on the external server and website.

Full Text of the Speech can be found in the OPCW website, archived as CWCC Plenary Statement.