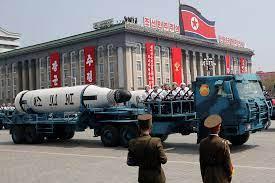 North Korea announced in February 2005 that it had nuclear weapons, and as per reports Pyongyang has already amassed enough fissile material to make six to eight bombs. Now with satellite reports giving indications, few analysts feel that North Korean preparation is on to test the device in the immediate future.

Almost a year after the last round of six-country talks (North and South Korea, the US, Japan, China and Russia) aimed at resolving the crisis over North Korea's nuclear programmes, worries about an imminent nuclear test by the reclusive state are growing multifold. Essentially the current deadlock appears to be more of a fight between the US, Japan and North Korea. The US has made it clear that it would consider taking the matter to the UN Security Council -- a prelude to possible sanctions -- if Pyongyang refused to resume the talks. North Korea has said sanctions would be tantamount to a declaration of war.

Currently, the US intelligence community is monitoring what appear to be preparations by North Korea to conduct a nuclear test. But, they are still unclear whether the activity is real or deceptive. North Korea has started digging holes and then filling them up with dirt, and such activity is suggestive of underground test preparations. Yet there are no indications of a nuclear weapon being positioned into any of these holes.

North Korea’s nuclear interests date back to 1956. With the help of the erstwhile Soviet Union, North Korea built its first reactor in 1965. In 1974 the North Koreans added a nuclear training agreement with China. The second reactor was built in 1986 at Yongbyon. A secret reactor was detected by the US in 1989. All these reactors are capable of enriching plutonium fuel rods to the levels necessary to make a bomb. Officially, the North Koreans agreed to freeze their plutonium programme in 1994, and they put 8,000 fuel rods at Yongbyon under seal. However, they continued covertly along another bomb-making route, using highly enriched uranium created in special centrifuges apparently obtained from Pakistan. As per a few analysts, the state has already tested the triggering mechanism for a bomb, and the only thing left to do is to set off a plutonium bomb to see if its technology works.

North Korea has in all probability produced plutonium through the reprocessing of spent fuel rods at its Yongbyon reactor complex. South Korea and the US have noticed movements in tunnels in the North Korean county of Kilju. The images show excavation and some construction which could be preparations for an underground nuclear test. Also, it is could be argued that the country would carry out a nuclear test, especially after its stunning announcement that it possessed atomic weapons because often when a country announces its membership in the nuclear club, the next step would be to test.

However, there also exists a possibility that North Korea could be doing these things to deceive the US spy satellites. North Korea understands any test would end negotiations with the United States -- and most likely with China. Probably, they are doing it just to increase pressure on the international community. As such many in South Korea, China and Russia express great scepticism that North Korea has a working bomb.

The Bush administration very recently warned North Korea for the first time that if it conducted a nuclear test, the US and several Pacific powers would take punitive action, but officials stopped short of saying what kind of sanctions would result. Although Washington has long held out the possibility of asking the UNSC to take action, both China and Russia have opposed such a move.

For the last few months along with Iran, North Korea is also testing the patience of the US. It is hoped that the door to dialogue is not completely shut. But, now it will entirely depend on China and to some extent South Korea to persuade the North Koreans from going nuclear. North Korea understands that the political fallout from such a blast could paralyze its already crippled economy. Japan will see to it that sanctions are put in full force. Interestingly, even if economic sanctions are approved, there would be no way to enforce them along the Chinese border, where most of North Korea's trade takes place. And most importantly with their already strained relations with Japan will China allow that trade to stop?

Nuclear riddles are complicated. Exactly seven years back in May 1998 India tested nuclear devices when nobody had expected them to do so and now North Korea is yet to test when everybody is expecting that they will test. The issue is attracting global attention, and the prestige of the disarmament lobby is at stake particularly when they have failed on all accounts to put some meaning into the recently concluded NPT review conference in New York.