India is Onboard of China's Space Station 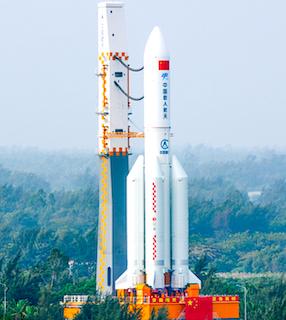 On October 31, 2022, China successfully launched the third and last space-station module, Mengtian. This module is required to complete the building of China's space station by the end of 2022. This space station is known as Tiangong, and after the full operationalisation of this station, China would become the only third country in the world, after the US and Russia, to have their own space station. This space station (with a mass between 90-100 Tons) consists of three modules. The recently launched module is a Mengtian laboratory cabin module, a major module for the Tiangong space station. The second module, launched on July 24, 2022, is also a laboratory cabin module called Wentian. The core module, Tianhe, was launched on April 29, 2021, and currently, Chinese astronauts (taikonauts) are staying there.

Two prototype missions preceded the entire project leading to this space station's development. The first mission was Tiangong-1 (September 2011– April 2018). It was a crewed laboratory and an experimental testbed to validate orbital rendezvous and docking capabilities. Tiangong-2 (September 2016 – July 2019) tested various critical technologies required for building the main space station. Based on the experiences of operating these two prototype stations, China is now in the final leg of establishing a full-fledged space station.

China's space station programme is a project operated by China Manned Space Agency (CMSA). This station would operate at an altitude between 340 and 450 km above the earth's surface. It is expected to have a lifetime of ten to fifteen years. International Space Station (ISS) has been the only operative space station since 1998. It is a massive station compared to the Chinese station, has a mass of 420 Tones, and is located around 400 km above the earth's surface. This station has two sections: the Russian section is operated by Russia, while the United States and other states (like Canada, Japan and some European states) operate the other section. Since US policies do not permit NASA to collaborate with China, China is not a member of ISS. In January 2022, NASA announced a planned date of January 2031 to de-orbit the ISS. After the Ukraine conflict began, Russia announced that they would eject from the space station by 2024. However, now it appears that they are giving it a second thought.

More than 3000 scientific experiments have been performed to date on ISS. As per available information, such experiments have played a major role towards some developments in fields like telemedicine, disease models, psychological stress response systems, nutrition, cell behaviour and environmental health. All this has become possible owing to the microgravity environments conducted on the ISS. One of the primary aims of China in establishing a space station is to provide a micro/zero gravity atmosphere to their scientists for undertaking research.

China is expected to conduct around 1000 experiments in the lifetime of this space station. There would be a focus on various subjects, from studying how plants adapt in space to how fluids behave in microgravity. China is progressing in a very systematic fashion towards deciding the scientific agenda for the space station.

In May 2018, China and the United Nations Office for Outer Space Affairs (UNOOSA) announced an opportunity to submit proposals for the conduct of space experiments onboard China's space station. China is keen that various states in the world should productively use their facilities. An excellent response was received for this joint announcement by China and UNOOSA. A total of 42 applications from organisations in 27 countries were received. A team of experts studied all these suggestions, and finally, nine experiments were shortlisted. Now they have become the first batch of experiments, which would be conducted onboard Tiangong.

Scientific organisations from various countries have joined hands together in designing these experiments. Indian agencies are involved in the conduct of two experiments amongst the group of nine experiments which have been finalised. An experiment in astronomy in space, titled 'Spectroscopic Investigations of Nebular Gas (SING)' is the brainchild of two institutions from two countries, namely: The Indian Institute of Astrophysics and the Institute of Astronomy of the Russian Academy of Sciences. While an experiment called 'Behaviour of Partially Miscible Fluid in Microgravity' will be executed by two organisations from two countries, namely the Indian Institute of Technology- BHU, (Varanasi, India) and the Université Libre de Bruxelles (ULB) in Belgium.

Around 2024, China will launch the Chinese Space Station Telescope (CSST). This system will operate as a space optical observatory for Chinese scientists to conduct sky surveys. During the recent launch, China used the Long March 5 B rocket, which can launch up to 25,000 kg (25 Tones) into low-Earth orbit (LEO). China was required to develop or upgrade various technologies for establishing the space station. One crucial achievement by China is the development of the robotic arm, which is necessary for conducting space station operations.

It is expected that ISS may function for another seven to eight years. Today, a few private players are also keen to establish their own space stations. Broadly, it could be said that the Chinese space station could be the only option for the world to undertake micro/zero gravity experiments, at least for some period, during the third decade of the 21st century. While developing the space station, China has been very thoughtful in presenting to the rest of the world that this is a project with clear scientific agenda, and they are very keen to have an international presence in this project. They have yet to decide on allowing astronauts from other countries to stay and work at this space station. On the face of it, there is no strategic plan projected by China in the context of space station development. However, China going solo towards successful development of a project of this magnitude is both a scientific and strategic "statement".

[Note: The article is based on the information available on various online media/open sources]