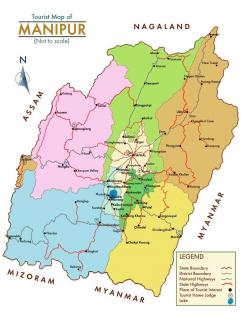 Contesting claims over territorial supremacy by rival insurgent groups have not only resulted in a violent conflict between the insurgents’ themselves but, it also has the potential to generate misunderstanding between communities they claim to represent. This is exactly the present state of affairs in India’s northeastern state of Manipur where several such groups have turned this beautiful land into their fiefdom.

These incidents were sparked by the clash of interest between two insurgent outfits, the United National Liberation Front (UNLF) and the Kuki National Organisation (KNO). The latter while claiming to represent the Kukis wishes to bring together all the Kuki-inhabited areas of Manipur under one administrative unit called ‘Zale-n-gam’ (Kuki Homeland), whereas the former – a prominent insurgent outfit in the state - wishes to establish an independent socialist Manipur.

In the aftermath of these gruesome killings, the two rival groups traded charges against each other and accused one another of fomenting communal discord. The KNO in a statement alleged that UNLF is encroaching on their territory – ‘Kuki Hills’ or ‘Zale-n-gam’. It warned UNLF to confine ‘physically’ and ‘ideologically’ in the Valley (Imphal East, Imphal West, Thoubal and Bishnupur districts) so as to avoid misunderstandings between the Kukis and Meiteis. The Kuki outfit further alleged that the June 09 killings were the direct consequence of UNLF's intrusive presence in its territory. On the other side, UNLF alleged that the Indian Army has been using the KNO against the UNLF to sow the seeds of communal distrust and animosity. The outfit further reiterated that it has nothing against the Kukis but it will deal with the KNO firmly. On its part, the National Socialist Council of Nagaland – Isak-Muivah (NSCN-IM) had alleged that these violent incidents have partly exposed the devilish plans of UNLF and the Government of Manipur.

This reminds us of the bloody Kuki-Naga clash of the 1990s that left several hundred civilians killed and wounded.

Moreh is one of the popular trade centres on the Manipur side of the India-Myanmar border. It has a population of about 16,737 (Census 2001). The Kukis constitutes as much half the population of the town, the Meiteis constitute just about 15 per cent and the rest constitute the Tamils, the Punjabis, the Marwaris, the Meitei Pangals (Muslims), the Nagas and other smaller tribes.

Border trade (both formal and informal) between India and Myanmar takes place mainly at Moreh on the Indian side and Tamu on the Myanmar side. The development of border trade at Moreh is expected to contribute to the growth of Manipur’s economy in particular. The Indo-Myanmar border trade through the Moreh-Tamu sector is estimated at around INR 16,000 million per year. Narcotics, arms and other contraband come into South Asia through the town.

However, life in this border town was often disturbed in a turf war between rival groups in their bid to control the town and its hinterlands. Almost all the insurgent groups have long been eying this town as it will dramatically enhance their financial positions. Moreh is connected by road to the rest of the Manipur by the National Highway - 39. Large numbers of passenger buses and private vehicles ply along NH-39. The Imphal-Moreh section (110 km) of NH-39 is widely used by the trading community to shop at Moreh.

Again, the Imphal-Moreh section of the NH-39 is under the control of various insurgent outfits. Insurgent groups have threatened to block the highways on several occasions when the owner’s of commercial vehicles refuse to pay the ‘revolutionary taxes’ demanded. Insecurity on the highways is compounded by repeated militant attacks on security force and commercial vehicles. While speaking in the State Legislative Assembly in Imphal on August 4, 2003, state legislator, Ibomcha Singh, stated that each and every passenger bus plying along the Imphal-Moreh section of NH-39 annually paid a sum of INR 30,000 to various insurgent groups. He also stated that smaller commercial vehicles paid INR 20,000 annually.

It is ironic that the territory of Manipur has been virtually divided between different militant groups. And there is competition among them over control of territory. This has led to violent conflict in the past. Indeed, this still poses a formidable challenge to peace in the State in future.

With various insurgent outfits asserting dominance over the town, the State and its people are perpetually at their mercy. Ironically, despite these repeated and disturbing incidents and persistent extortion, the State Government has failed to initiate effective action to bring the situation under control. Providing fail-safe security may be impossible, but a great deal can certainly be done to diminish the threat and provide freedom of life.