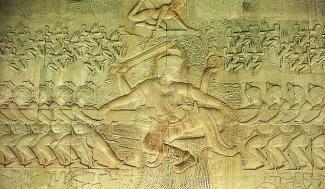 Free for one in sovereign water and EEZ to free for all beyond EEZs both have depleted the Ocean by competing demands with increasing disputes among countries.

Samudra Manthan- churning of the ocean- the legend in Hindu mythology which is depicted in its magnificent sculpture at Suvarnabhumi Airport in Bangkok and as in bas-relief at Angkor Wat (Cambodia) has revisited in the form of negotiating a legally binding instrument for the conservation and sustainable use of ‘Marine Biodiversity beyond National Jurisdiction’ (MBBNJ) under the UN Convention on the Law of the Seas (UNCLOS). The first preparatory committee (PrepCom) met between 28 March and 8 April to delve into ‘elements of draft text’ of future agreement at UN headquarters.

World Ocean Day is being celebrated today (June 08). More than three decades later, it is appropriate on the eve of Ocean Day to ask will the countries be able to agree and adopt a new multilateral agreement like UNCLOS on deep-sea biodiversity. Will India be one of the lead anchors during the negotiation process by protecting her ‘freedom of navigation’ standard strategic clause, or would its pursuance of national interest be called as obscurantist for a consensual global agreement? After nine Working Group meetings since 2006, the General Assembly in 2015 decided to develop a legally binding instrument under UNCLOS on MBBNJ.  During these informal working group discussions, the positioning of the lead parties (who have potential stakes on the seas or disputes over territorial waters) is already an indication of the uphill task for a consensus agreement.

The sustainability of the ocean is uncertain and foreseeable only to a limited extent of its economic exploitation and militarization. Besides, the UN-sponsored World Commission on Environment and Development Report, famously known as ‘Our Common Future’ (1987); Chapter- 17 of Agenda 21 approved by UNGA; and the oceans-related goals of the World Summit on Sustainable Development (WSSD 2002), the oceans have left open for exploration and exploitation. The UNCLOS of 1982 and its byproduct the International Seabed Authority (ISA) have authorized and facilitated countries to maximize the utilization of ocean and its resources within their national jurisdiction (territorial water) and rights (Exclusive Economic Zones-EEZs) and beyond. From free for one in sovereign water and EEZ to free for all beyond EEZs have both depleted the ocean due to competing demands amongst nation states. The territorial jurisdiction extends to territorial water up to 12 nautical miles from the nearest point of the baseline; beyond territorial waters is the Contiguous Zone extending up to 24 nautical miles, and beyond that up to 200 nautical miles is the EEZ.

However, there has been a growing demand for proper ocean governance structure on the high seas as the UNCLOS regime is either limited or ineffective in managing disputes and overlapping exploitation of resources and protecting the degradation of the marine world. Against this backdrop, the UNGA passed Resolution 69/292 in 2015 approving a discussion on the scope, parameters and feasibility of a possible new international instrument on MBBNJ. Similarly, while Millennium Development Goals (MDGs) had hurriedly omitted ocean as a problem, the Sustainable Development Goals (SDG) (approved in 2015) highlighted in Goal-14 to ‘conserve and sustainably use oceans, seas and marine resources for sustainable development with seven targets and three provisions of means of implementation.

Unfortunately, recent events occurring in and around oceans will make any world governance modality a very challenging task. Due to increasing claims and counterclaims, tacit military buildup and nuclearization in the South China Sea and the East China Sea, the initial year of implementation of the US-led Southeast Asia Maritime Security Initiative (MSI), rush to establish a sphere of influence by world powers in the ocean, India-China competition to gain a strategic foothold in the Indian Ocean, struggle for Arctic oil exploration and desperate measures to raise naval powers by littoral countries, formulating a governance modality for the world’s last ‘common’ will be a tough road ahead. It will be more challenging than in the past to agree on a negotiated outcome for ocean governance.

Notwithstanding the conceptual construct of ‘India’s Ocean’ or ‘Sea of India’ or obsolete ‘power vacuum’ discourse, of late, the Indian Ocean has become the ‘foremost policy priority and the cornerstone of India’s newfound role in governing global/regional ‘commons’ as reflected in series of Indian Prime Minister’s speeches abroad and at home. The Indian Ocean is the third largest ocean accounting for 20.7 per cent of the Earth’s total surface and 30 per cent of the total global ocean area. Compared to other world oceans, until the mysterious disappearance of Malaysian Airlines Flight 370, the Indian Ocean was relatively lesser known. It is surrounded by a rim of developing countries and Island States with a population of about 2.5 billion making it an attractive market. It’s also a huge energy and trade maritime highway as it carries half of the world’s container ships, one-third of the bulk cargo traffic and two-thirds of the world’s oil shipments.

If not addressed foresightedly and multilaterally, India’s ambitious ‘blue (ocean) economy’ potential will soon face a formidable challenge even before it takes off.  According to the Indian Ocean Experiment (INDOEX), the Indian Ocean is gravely polluted by plastic debris and chemical runoff.  It has documented widespread pollution covering about 10 million sq km (3.86 million sq miles). According to World Wide Fund for Nature (WWF), more than 80% of marine pollution is caused by land-based activities that cause oil spills, fertilizers and toxic chemical runoff and the discharge of untreated sewage. Additionally, it bears the brunt of oil transits thereby further risking oil spills and dangers due to heavy traffic.

The present government in India has identified fulfilling the potential of the ocean economy as one of its major national and foreign policy goals. The government has focused on the revival of India’s rich maritime heritage through ‘Project Mausam’ and ‘Sagarmala’. Last August during Forum for India-Pacific Island Countries (FIPIC) meet, India sought cooperation from Small Island Developing Countries (SIDS) to harness the ocean economy internationally. While the blue economy comprises largely of enhancing fisheries and tourism (based on endangered marine species protection) for SIDS, India is yet to spell out its priorities for the blue economy. Will the SIDS in Indian Ocean or beyond support India’s position in MBBNJ? It is to be noted here that already the SIDS, which also broadly comprises the Forum of Vulnerable Countries on climate change negotiation, displaced a very cold response to India’s reluctance to accept the limit of global temperature to 1.5 degrees during the recently concluded Paris Climate Agreement.

The MBBNJ negotiations, both informal and open-ended, witnessed contrary positions of the parties on issues such as area-based management, access to and benefit-sharing in terms of both monetary and non-monetary, and replication of the ISA model for governing MBBNJ. Consequently, guided by its national interest, India has been ensuring access and benefit-sharing of marine resources to all. While emphasizing the importance of marine resources as the foundation for sustainable development, India argued that marine living resources were critical but threatened by IUU (Illegal, unreported and unregulated) fishing and unsustainable aquaculture practices, including unselective trawling and deep-sea fishing.

Subsequently, there was growing support for a new legally binding instrument on MBBNJ under UNCLOS. But China was not in favor of a legally binding MBBNJ. It also had strong reservations on mechanisms for transboundary Environmental Impact Assessments (EIAs) and a dispute settlement mechanism. China had also opposed setting a timetable for negotiating an implementing agreement. India, however, supported a legal regime with reservations on rights associated with freedom of the high seas. China and India’s interventions clearly indicate the rising disputes between the two countries in the East Sea (South China Sea) and also the latter’s ambition to fathom the Indian Ocean against growing Chinese influence.

Indian Prime Minister in his address to the General Assembly on September 25, 2015, had rightly pointed out that “the distinct goal on ocean ecosystem reflects the unique character of its challenges and opportunities”. To address these challenges and opportunities, the Indian negotiating team should build a coalition of like-minded countries, especially in ‘Indo-Pacific’ as spelt out in the latest Indian Navy strategy document -- ‘Ensuring Secure Seas: Indian Maritime Security Strategy. The negotiating team must also involve major stakeholders – the Indian Coast guard, Navy and only Tri-Forces Command at Port Blair -- who are strategically monitoring and managing both territorial waters, EEZs and beyond in the Indian Ocean. The last ‘commons’ won’t be too long to become a ‘tragedy of commons’ if countries follow the business-as-usual approach.