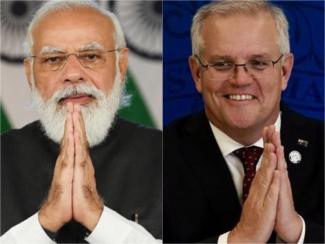 In the presence of Indian Prime Minister Narendra Modi and Australian Prime Minister Scott Morrison, Indian Minister of Commerce and Industry Piyush Goyal and Australian Trade Minister Dan Tehan signed an interim trade agreement on April 2, 2022, at the signing ceremony of the India-Australia Economic Cooperation and Trade Agreement. Minister Goyal hailed the agreement and said bilateral trade between the two nations would jump from the current USD 27 billion to nearly $50 billion over the next five years, covering most of the goods and services traded under liberalized tariffs between both countries. This is the first such trade pact with a developed country as the Indian Prime Minister hailed the deal by saying, 'this is a watershed moment for our bilateral relations …. together, we will be able to increase the resilience of supply chains and contribute to the stability of the Indio-Pacific region'. (Economic Times, April 3)

About five weeks back, both countries had agreed to sign this agreement, which would be converted into a full-fledged Comprehensive Economic Cooperation Agreement (CECA) in the next 12 to 18 months as a logical next step forward. With liberalized tariff model in place, the number of items for mutual trade will increase from the current areas like textiles, mining, pharmaceuticals, education, renewables, railways, tourism, defence and others. India will likely allow Australia market access for coal, mineral ore, wines and agricultural products. At the same time, Australia has hinted that it will not engage in sensitive spheres like dairy, beef, wheat, rice, sugar, iron ore and medical devices. While fine prints of this agreement and their consequent results are likely to see some procedural hiccups from both sides, such bottlenecks will eventually be sorted out by bureaucracies from both sides as they need each other in economic and security spheres for achieving larger strategic goals.

This agreement will boost economic ties and cultural bonding. It is also embedded with critical strategic underpinnings that need careful examination. First, a 'watershed moment' in bilateral relations, from an Indian prism, goes beyond trade and economics to a regional strategic landscape where India and Australia have a common headache called China. The intensity of mutual economic cooperation invariably leads to a confluence of aligned self-interests. For example, India is currently embarking on an ambitious semiconductor manufacturing capacity building, which attracts global giants and intends to collaborate with R&D institutions, where institutes like Sydney Nano Institute and others can always be a part of the Indian semiconductor eco-system. Fields like electronic hardware, infrastructure, capital goods, and medical devices are where Australian investment can come from, while Indians can source mining, coal and metals from Australia. Of utmost importance to the Indians would be strategic source minerals like titanium, zirconium, tantalum, antimony, cobalt, lithium, manganese ore, niobium, tungsten and vanadium, of which Australia has one of the largest deposits in each.

Second, the resilience of supply chains can be tested by both countries not only in terms of goods and services but, more importantly, by ensuring trouble-free sea-lane communication for transportation and logistics. This otherwise necessitates robust maritime security arrangements, including a military component. Bilateral and multilateral naval exercises where both countries participate should also take business interests into account. Third, free trade deals like this may also spin off into intermediate countries in southeast and east Asia like Indonesia, Malaysia, Vietnam, and others for India and Australia, where some common interests can converge. Coal extraction and imports from Australia and Indonesia are considered important for steel and power companies like Adani, Jindal, Tatas, etc. Diplomatic efforts have finally borne fruit as the protracted legal battle and protests against Adani Group's acquired Carmichael coal mine in Queensland have ended. The company is ready to export coal now. Defence industrial collaboration is another critical area where Australian companies may get attracted to the Indian market while India does.

Last but not least, both countries have major stakes in evolving regional Quad grouping, where both agreements and disagreements are being further fine-tuned for meeting common strategic objectives. The grouping's evolution has already attracted bitter criticism from China, which terms it as 'Asian NATO' with lurking fears of a military alliance undertone. This may not be an anti-China club, but it is common knowledge that this grouping is intended to checkmate Chinese influence in the Indo-Pacific region. India's ambivalent stance on Ukraine has made other members of the Quad, including Australia, uncomfortable. Still, trade pacts with India have the potential to offset diplomatic and perceptional discomfort if both countries understand each other's national interests. Prime Minister Modi's emphasis on the need for stability in the Indo-Pacific region is bolstered by the India-Australia interim free-trade deal.

If legendary Don Bradman saw a bit of Sachin Tendulkar in him, the whole of India is also in awe of late Shane Warne's wrist spin wizardry. This sums up how both countries look at each other in cricket and on practically every field.

Author Note
Deba R Mohanty is a founding member and Vice President of the Society for the Study of Peace and Conflict, New Delhi. He is the Editor of the 'Defence and Security Review' (DSR).
Tags
India, Australia, Quad, CECA, Indo-pacific