Crisis in Ukraine: Humanity is the Biggest Loser 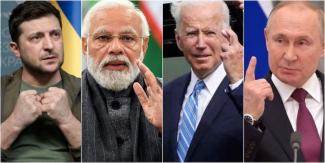 Different media groups have produced contrasting perceptions of the situation in Ukraine thus far. Internet and social media sources are full of deep fakes, leaving the common citizens divided virtually along with Russian and non-Russian narratives. But, the reality on the ground is that as of March 1, 2022, Russia is in complete control of significant parts of Ukraine's territory. Russian troops are about to surround Kyiv and have fired missiles on Kharkiv, Chernihiv and fourteen other areas. On February 28, 2022, at the behest of the President of Belarus, Alexander Lukashenko, delegations from Ukraine and Russia met at the Pripyat River on the Ukraine-Belarus border, north of Chernobyl, an area that is currently under Russian military control round, and tried to diffuse the crisis. However, the talks failed, leading to a situation whereby US and NATO members started pledging material support to Ukraine and scrambled their military assets for defence or retaliation to any possible action by Russia beyond Ukrainian territory. Ceasefire talks will resume on March 3, 2022, again between Russia and Ukraine, this time along the border between Poland and Belarus.

Ukraine has been formally accepted as a new member of the European Union. United Nations Security Council has thus far been proved ineffective as Russia has used its veto power, China and India have abstained, while most others have supported the US. However, on March 2, 2022, at least 141 out of 193 members voted for an immediate ceasefire and deplored in the strongest terms on the situation in Ukraine. Russia, Belarus, Eritrea, North Korea and Syria voted against this resolution, while 34 members abstained, including India. This was done under the U4P resolution of the UN. Different other options are also available – a case against Russia in the International Court of Justice (ICJ) under the Genocide Convention (Convention on the Prevention and Punishment of the Crime of Genocide) or make Russia a trade pariah through suspension of Russia's most favoured nation (MFN) status under the rules of World Trade Organization (WTO) by invoking article XXI of the General Agreement on Tariffs and Trade. Severe economic sanctions, mainly trade and financial, have been imposed on Russia by the US, NATO, Japan and South Korea. Contradictory claims are coming on the protection of critical nuclear facilities like in Chernobyl or Zaporizhzhya.

As a response to NATO's direct support to Ukraine, Russian President Vladimir Putin has ordered the Defence Minister Army General Sergey Shoygu and the Chief of the General Staff Army General Valery Gerasimov to put all land, air and naval-based nuclear deterrent forces in a 'special regime of combat duty. It is interesting to note that less than a year ago, Russian President Putin and US President Biden had said that 'the threat of nuclear war was a Cold War relic'. "Nuclear war cannot be won and must never be fought," they both had agreed. Few are aware that nuclear deterrent forces of all nuclear powers are always in a state of readiness, only they are not announced. In sum, the ground reality suggests that Russians have not yet stepped back, neither agreed to any proposal floated for de-escalation and Ukrainians have clung to their position. In this stalemate situation, Russian forces appear ever eager to achieve their politico-military objectives at any cost. In pure military and diplomatic terms, it is an advantage Russia till date.

If Russia is blamed for this crisis, the opposite western world is equally blamed for creating it. It is well known by now that historical narratives aside, it was the disintegration of the Soviet Union and incessant humiliations meted out to the Russians by the West for the last three decades, which has resulted in Russian determination to teach the West a lesson or two. If this crisis spills over to Taiwan Straits, signs of which are slowly emerging, it will be a different scenario altogether. Economic sanctions would then remain the only possible option as both Russia and China will use their veto power in UNSC to thwart any overt military action against them. Sanctions have seldom worked in the cases of Iran, North Korea or Myanmar. Even there was minimal impact on India when it conducted nuclear tests and came under severe sanctions. Preparatory stages of military interventions (as the Russians put it) or war (as the Americans claim) consider the widest possible sanctions by initiators/aggressors. It is assumed that Russia will be impacted to a certain extent, but alternate routes always open up when there is a crisis. It is now fairly assumed that Russia will not bulge till its strategic objectives are met. At the same time, the US and NATO members would find it difficult to an overt retaliation as Ukraine is not yet a NATO member. The more material support Ukraine gets, the more prolonged will be the battle, which will pay targeted strategic dividends to Russia, which may overthrow Ukrainian President Volodymyr Zelenskyy in the near future and replace him with former Ukrainian President and Russia loyalist Viktor Yanukovych.

While all kinds of actions and counter-actions, claims and counter-claims, boastful threats and counter-threats are floating around, it is the deep fakes produced and propagated incessantly by opposite groups (pro-Russia and anti-Russia) that have equally damaging capacities as those created by military forces on the ground. Instances of satellite pictures, morphed videos, racist action and behaviour, stage-managed humanitarian crisis (often camouflaging the real scenario) and controlled distortions have flooded in all forms of print, video and audio-visual communication. In this scenario, deep fakes are different from the 'reality distortion field', a concept actualized by the founder of Apple – Steve Jobs – which enabled the power of technology for the global good. Deep fakes have more destructive powers that distort real pictures and, more importantly, crystallize human thinking processes. In the absence of complete data on actual ground situations in Ukraine, its border military and non-military actions will encourage deep fakes further and create distorted pictures on both sides of the fence. If anti-Russian or anti-Chinese feelings are stronger day by day, so are anti-American and anti-West. One does not know the exact time of the inflexion point.

India's nuanced and perceived ambivalent position on the crisis has brought mixed results thus far. Russians are happy. Americans are unhappy but can not do much. Chinese are apprehensive of Indian intents. Ukrainians hoped for Indian overt support but were disappointed. Elsewhere, states are appropriating their strategies to deal with all eventualities. Even though India is not yet a member of the high table in technical terms, its stature and location have grown in global affairs.

And amid all this, Ukraine is sandwiched between global power games and innocent citizenry across Europe and elsewhere is the biggest victim.

The article is part of "Defence and Security Review", Volume 2 (No.2), March 2022. Also, in the issue,  Brief No.1: "Course Corrections in Military Production" and, Brief No.2: "India's Trade Agreement with UAE is a Strategic Step Forward."