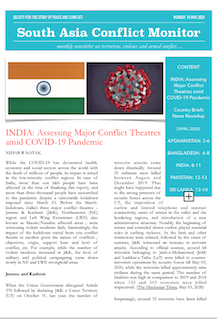 While the COVID-19 has devastated health, economy and social sectors across the world with the death of millions of people, its impact is mixed in the low-intensity conflict regions. In case of India, more than one lakh people have been affected (at the time of finalising this report), and more than three thousand people have succumbed to the pandemic despite a nationwide lockdown imposed since March 23. Before the March-lockdown, India's three major conflict theatres – Jammu & Kashmir (J&K), Northeastern (NE) region and Left Wing Extremism (LWE) also known as Maoist/Naxalite affected areas - were witnessing violent incidents daily. Interestingly, the effect of the lockdown varied from one conflict theatre to another given the nature of conflicts - objectives, origin, support base and level of conflict, etc. For example, while the number of violent incidents increased in J&K, the level of military and political campaigning came down slowly in NE and LWE stronghold areas.

When the Union Government abrogated Article 370 followed by declaring J&K a Union Territory (UT) on October 31, last year; the number of terrorist attacks came down drastically. Around 25 militants were killed between August and December 2019. That might have happened due to the strong presence of security forces across the UT, the imposition of curfew and limited telephone and internet connectivity, onset of winter in the valley and the bordering regions, and introduction of a new administrative structure. Notably, the beginning of winter and extended drawn curfew played essential roles in curbing violence. As the limit and other restrictions were relaxed, followed by the onset of summer, J&K witnessed an increase in terrorist attacks. According to official sources, around 64 terrorists belonging to Jaish-e-Mohammed (JeM) and Lashkar-e-Taiba (LeT) were killed in counter-terrorism operations by security forces till May 03, 2020, while the terrorists killed approximately nine civilians during the same period. The number of fatalities was high in comparison to 2019 and 2018 when 152 and 215 terrorists were killed respectively. [1]

Surprisingly, around 32 terrorists killed in Jammu and Kashmir region during the COVID-19 lockdown period. Besides, according to government sources, 35 local youths have joined terror groups within the first four months of this year despite the national lockdown as against 119 in 2019 and 219 in 2018. [2] Local populace even participated in street protests in Pulwama against the killing of Hizb-ul-Mujahideen's (HM) local commander Riyaz Naikoo by defying COVID-19 restrictions.

The increase in violence along with the rise in the number of COVID cases in J&K indicated that first, the fear of virus could not stop highly radicalised cadres of the HM and LeT. Second, the local peoples' support to the militants remained intact despite lockdown and the presence of the deadly virus. The militants wanted to take advantage of the security and civil administrations' engagement in managing the COVID related issues. In this regard, the militants got support from Pakistan and sympathetic front organisations to accuse India of not taking enough action against the spread of COVID cases in J&K. Third, unlike other rebel groups in India, J&K militants can continue their activities by becoming less dependent on the local people. Lastly, they were under pressure from Pakistan and also under local weather conditions to perform. For example, since the onset of summer, the Line of Control (LoC) continued to remain tense, with 1,547 ceasefire violations between India and Pakistan in comparison with 3,168 and 1,629 ceasefire violations in 2019 and 2018 respectively. [3]

Unlike, J&K, the level of violence and operations of insurgency groups came down in NE regions. The region had already experienced a reduction in insurgency before the declaration of national lockdown due to peace negotiations with some insurgent groups and stringent actions against others by the security forces. Union Minister of State for Home G. Kishan Reddy said, "Compared to 2013, there have been 70 per cent reduction in insurgency incidents, 80 per cent in civilian deaths and 78 per cent in security forces casualties in 2019. As many as 1,824 insurgents surrendered between 2014 and 2019." [4]

Since the conflict of Northeast region is based on identity issue, except a few, the state government's efforts to reach out to the people through various social security programmes during lockdown period, prolonged national lockdown and Coronavirus preventive measures disconnected the support base of the rebel groups. Due to the lockdown, the police presence has also increased, and each village is placed under police surveillance. This disturbed the supply chain of the rebel groups, who are mostly dependent on the locals for food, funding and also ferrying of arms and ammunitions. The security forces worked as saviours by reaching out to the people with food supplies, medicines and other emergency requirements.  At the same time, the security forces continued its operations against those insurgents who were not amenable to the peace negotiations.

Most importantly, in the case of NE insurgents, the trans-boundary lockdown or global lockdown due to COVID-19 (or simultaneous lockdown in Myanmar and Bangladesh) and strict vigilance at the borders restricted their movements. In the absence of human intelligence and limited mobility, the rebels depended more on mobile phones for intelligence gathering. That exposed them to state surveillance. For example, acting on India's request, on May 15, the Myanmar military handed over 22 leaders of the northeast insurgent groups to the Indian government.[5]

For the LWE groups, the lockdown period was a crisis as well as an opportunity. In terms of emergency, the LWE were vulnerable to COIVD-19 lockdown than rebel groups of J&K and NE because their movement has been more people-centric than others. Moreover, it has been an ideological movement based on socio-economic issues. Therefore, the CPI-Maoist struggles to cope with the situation, given their over-dependence on the local people. To note, CPI-Maoist is responsible for 98 per cent of violence and attacks on the state machinery.

During normal times, the CPI-Maoist purchases ration and other essential commodities mainly from village-level Haat or markets through their local agents. During this time, their supply of food and other necessary items were affected. For example, one media report indicated that in the Bastar region, one of the Maoists stronghold areas, the CPI-Maoist could not procure essential items as over 480 weekly haat bazaars (local Agri market) remained closed for the past three weeks. [6]

Similarly, Malkangiri-Koraput-Visakha Border (MKVB) division under the Andhra Odisha Border Special Zonal Committee (AOBSZC) of the CPI-Maoist had reportedly offered a unilateral ceasefire, especially in areas under the MKVB. The Maoists justified the move by stating that the truce would facilitate the relief operations of the government in the remote areas to fight COVID-19. However, the fact was that the CPI-Maoist wanted to access the government ration supply in the tribal regions since the outfit's supply chain was depleting due to the lockdown. Since the state did not respond to the offer, the AOBSZC on April 24, 2020, called upon the people to join the struggle against the capitalistic forces, which it said is destroying the earth for their selfish goals. [7]

Interestingly, other CPI-Maoist divisions took advantage of the situation. On the pretext of spreading awareness about COVID-19 in the villages, some Maoists, especially from Bastar region reportedly recruited new cadres and instigated their local recruits to demand more ration. On May 10, the security forces killed one Maoist cadre who was trying to recruit villagers in the Gadchiroli district of Maharashtra. [8] Media reports indicated that by taking advantage of lockdown period and due to less number of operations in the Area of Responsibility (AOR) of security forces, the Maoists conducted intensive recce in the Rajpenta and Chimilipenta areas in Chhattisgarh's Dantewada district to plant Improvised Explosive Devices. There were also reports about the CPI-Maoist holding meetings in the Bastar region to regain strength.[9]

The lockdown during COVID-19 period has both advantages and disadvantages for the rebel groups. This pandemic could be a difficult time for them. But there are also instances of no significant impacts of lockdown on the rebel groups' operations. In the post-COVID period, the rebels might regain strength by taking advantage of economic slowdown and unemployment. It could be an ideal situation for both Maoists and Islamists. However, the survival of ideological and religious-based movements is more likely than the ones based on the socio-economic agenda in this kind of situation.

[The article is part of South Asia Conflict Monitor, May 2020.]

[5] "On India's Request, Myanmar Hands Over 22 Northeast Insurgents Long-Wanted In Manipur And Assam; Special Plane Bringing Them Back", India.Com, May 15, 2020.