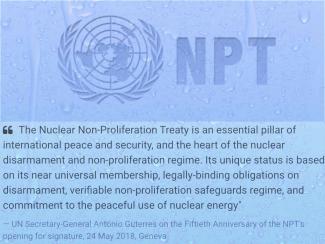 This year marks the golden jubilee of the Treaty on the Non-Proliferation of Nuclear Weapons (NPT) and the silver jubilee of its indefinite extension. Legally binding in nature, this Treaty is often regarded as the bedrock of the global nuclear non-proliferation regime. Apart from the non-proliferation efforts, the Treaty advocates disarmament and peaceful use of nuclear energy. It recognizes five nuclear states (N5 states) namely the United States, Russia, the United Kingdom, France, and China. The latter two acceded to the Treaty after 22 years of its coming into force. However, India, Pakistan, Israel, and North Korea are not members of the NPT and do not adhere to the Treaty. Ideally speaking, the five recognized states vowed not to engage in proliferation of or transfer of nuclear weapons technology to any non-nuclear-weapons state/s or non-state actors. The International Atomic Energy Association (IAEA) plays a crucial role in ensuring that and serves as the watchdog for compliance of the agreed clauses of the Treaty. The Treaty has the most significant achievement of having the most number of signatories amongst all arms control and disarmament agreements. At the height of the Cold War, NPT played a significant role in bringing down the stockpiles of the US and former USSR by almost 70 percent. NPT is also given due credit for curbing the number of nuclear weapons states to nine, without which it would have resulted in more NWS (nuclear weapons states) existing today. Prime examples of states which halted their nuclear weapons program were Kazakhstan, Ukraine, and most importantly South Africa which dismantled its nuclear arsenal. All of them are signatories of the NPT and are currently NNWS (non-nuclear weapon states). Since coming into force in 1970, the Treaty at present includes 191 nations (which are all UN members) except India, Pakistan, Israel, and North Korea.

Critics argue that the Treaty lacks the ability to address its structural problems and is resistant to change. Former India diplomat Amb Rakesh Sood argues that the Treaty still reflects the Cold War realities and stands irrelevant in the multipolar world that exists today. In addition to that, the Treaty is also often criticized for serving the interests of the superpowers namely the United States and Russia making it exclusive to the P-5 countries. Countries like India and Pakistan argue that the cut-off date as per the Treaty, Jan 1, 1967, is discriminatory as the Treaty fails to recognize them as nuclear powers. The deadline sets exclusion on who will keep nuclear weapons and gives little consideration to the numbers and the pace of nuclear modernization by the N-5 nations today.

While the Treaty has largely been successful and able to draw a common consensus on the proliferation of nuclear weapons, it faces substantial challenges today which are consequences of states’ insecurities, regime survival, and complex geopolitics. The four non-signatories to the NPT pose a lesser challenge than North Korea and Iran that were both once signatories of the NPT. At present, Iran and North Korea (which exited from NPT in 2003) continue to pose significant challenges to the non-proliferation efforts. Further proliferation efforts by these two states have resulted in complex geopolitics and unstable neighborhood which may further consequently result in other regional countries giving up NPT commitments leading to horizontal proliferation. North Korea has proactively engaged in repeated testing and expansion of its arsenal, posing an existential threat to Japan and South Korea. This can lead to regional instability and could possibly provoke the other two neighbors to arm themselves if pushed beyond a point. The Middle East region faces a similar quandary. Iran has been under continuous suspicion of developing a covert nuclear weapons program under the veil of peaceful use of nuclear energy consequently facing repeated sanctions due to it. This has been a point of serious concern for states like the US and Israel. Other countries in the region have raised their doubts regarding the future commitments to the NPT. This includes Turkey and Saudi Arabia.

There exists a wide variety of opinions both in favor and against the relevance of the NPT. However, there is no alternative legally binding treaty or institution with a membership of almost the whole of the United Nations minus the four. With the ultimate legacy of surviving and effectively bringing down the number of nuclear weapons during the Cold War behind it, one must remain hopeful of NPT even in challenging circumstances of today. There exist structural weaknesses and challenges for the NPT accordingly calling for revision and amendments to the provisions of the Treaty. Changes require indiscriminate and unbiased evaluation of prevailing nuclear order currently in approbation to superpower hegemony. Given the modernization, uncertainty, and hostilities, the relevance of an effective NPT is even more now than earlier.

Author Note
Ankit Kumar is a New Delhi based strategic affairs analyst with a research focus on Nuclear Deterrence and International Security. He was earlier associated with New Delhi based Centre for Land Warfare Studies (CLAWS), the Observer Research Foundation (ORF), and the Ministry of External Affairs (MEA).
Tags
NPT, Nuclear, UNSC, IAEA