The Role of Women in Indian Military: Why the Battle for Equality is Only Half Won 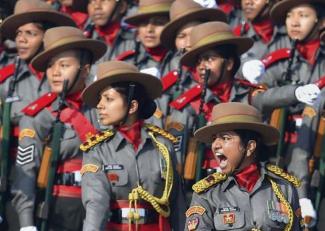 On February 15, 2020, the Supreme Court of India made a landmark verdict on civil suit ‘The Secretary, Ministry of Defence versus Babita Punia and Others’ (civil appeals nos. 9367-9369 of 2011 read along with nos. 1127-1128 of 2013 and no. 1210 of 2020) by allowing permanent commission status to women officers in the Indian armed forces and making them eligible for command positions (which enables them now to perform all types of military roles – full combat, combat support and services). The government has been granted a three-month period to implement the ruling. “The Government of India is working to strengthen the ‘Stree Shakti’ in our Armed Forces and we stand committed to move forward in this direction,” Defence Minister Rajnath Singh said while welcoming the verdict.

Women in combat have a history of their own, which spans over a millennium. Recorded history cites dozens of examples of women in combat roles or in leadership roles as queens. Western literature on the subject cites valiant roles of brave women like Queen Boudica, Joan of Arc, Olena Stepaniv (the first enlisted female soldier in the First World War), and countless others. Countries like Russia had all-female combat units, while the Spanish civil war witnessed the employment of thousands of women in combat and rearguard roles from both sides. Eastern literature cites similar examples of both common women donning combat roles and brave queens leading from the front that includes accounts of Rani Durgavati, Bibi Dalai Kaur, Tarabai and countless others to the most famous Rani Lakshmibai of Jhansi.

From the Second World War till today, however, the role of professional women soldiers has been systematically synchronised with combat requisites, physical disadvantages and societal limitations. This has resulted in women soldiers not allowed in frontline combat roles and thus reducing them to performing what the Supreme Court terms as ‘Adjunct’ roles like combat support, services, administration, etc. Different countries have taken varying degrees of time to allow women for combat roles after prolonged organisational and legal battles between women soldiers, militaries and states. A survey of such a demand and eventual permission for combat roles for the women officers in many countries (from the US, the UK and Russia to Kurdistan) spans anywhere between 20 and 50 years to fructify. In India, it has taken close to two decades.

Military institutions are structured to perform specific and specialised professional duties and hence resistant to changes, which are essentially subjective like gender, equality and related issues. Military sociologists like Charles Moskos take a relatively progressive view of the role of women in combat, while scholars like Martin Van Creveld argue to the opposite.

The debate as to whether allow women soldiers to perform combat duties or not revolves around three concerns – physical, societal and tactical – all three of which perpetuate both traditional and existing mindsets of individuals, institutions and the state. Different physical disadvantages are cited by several studies as primary reasons for the non-inclusion of women in combat, while societal reasons from restrictive traditions to romantic relationships within combat units are cited as limitations for women. Most importantly, several examples suggest that not only the inclusion of women in frontline combat operations entails tactical deficiencies but more importantly such limitations alter the outcomes of missions. This argument, of late, has been countered by several studies emanating from institutions across the world, including Harvard and MIT.

Enlisted as part of the military in 1992, Indian women officers have battled their way through a series of petitions (especially since 2003 onward) on issues of equality in employment terms to non-inclusion of women officers in combat units, a battle that appears to have culminated in the recent Supreme Court judgment. This is a historic judgment for the very simple reason that it judiciously blended both objective (professional military rules and policies) and subjective (primarily sociological and psychological) aspects of the location of women officers in military institutions.

But, the real battle has just begun. The government has further options like requesting for a review, although it has grudgingly yet overtly accepted the verdict. Implementation of the verdict necessitates dozens of administrative, organisational and related changes, for which a three-month time period is insufficient. The government may go slow on the verdict. Resistance from within the military is not ruled out, which could slow the process of implementation.

It has been a long battle for women officers to travel such a distance – from enlistment and adjuncts to permanent commission – considered a tactical win. Real win will occur when the institutional heart and structure embrace them in totality.

Author Note
Deba Mohanty, Vice President, Society for the Study of Peace and Conflict, New Delhi. Views are personal. He can be reached at debamohanty@sspconline.org
Tags