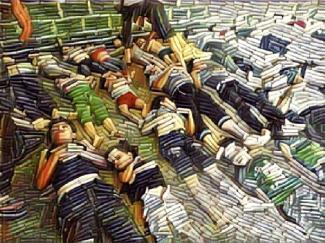 The Syrian crisis has achieved the unachievable. It has compelled a communist country to talk peace and democratic/capitalist countries to talk war. Fortunately, it appears that the invasion of Syria by the US forces has been stopped, at least, temporarily. An agreement on chemical weapons stockpiled in Syria has been reached following the talks held in Geneva between the Foreign Minister of Russia, Sergey V. Lavrov, and US Secretary of State John Kerry. This agreement will facilitate the fulfilment of obligations by Syria deriving from the Chemical Weapons Convention (CWC), which it has decided to join.  The CWC represents the sole multilateral mechanism to rid the world of chemical weapons and now Syria has agreed to cooperate with the UN agency which deals with the issues concerning the abolishment of chemical weapons. However, the US has issued a warning to Syria, saying “the threat of force is real” if it does not destroy its chemical weapons stockpile.

Under the present deal, Syria has a week time (September 20-27) to give details to the UN on the amount and locations of its chemical arsenal. Subsequently, the UN agency has to pull its all effort to either destroy these weapons or if necessary the weapons would be moved out of Syria. It had almost looked impossible that the sensibleness would prevail after the usage of chemical weapons on the Syrian population on August 21, became public. Some time back the US President Barak Obama had declared that any usage of Chemical Weapons in Syria would amount to the crossing of the “red line”. In case of any such attack, the US President would launch a military offensive against Syria. In the recent past, the US had launched a major campaign against Iraq only on suspicion that they have stockpiles of the Weapons of Mass Destruction (WMD).

However, no exact detail of the number of chemical weapons possessed by Syrian has been released to date. There have been a number of speculations. As reported by the BBC, according to the “French intelligence assessment which was published in September 2013, it is believed that Syria possesses more than 1,000 tonnes of chemical agents and precursor chemicals. This amount is made up of some hundreds of tonnes of Sarin, quite a few hundreds of tonnes of Sulphur mustard and tens of tonnes of VX (nerve gas).” The article (“Syria's chemical weapons stockpile” BBC, September 20) also states that as per a report released by the United States in 2002, it is understood that the Syrian government had started to build its chemical weapons programme in the year 1970. Reports also suggest that Syria received the first help from Egypt. In addition to this large chemical brokerage houses in Holland, France, Switzerland and Germany are regarded as the chief suppliers to the technology aspect of Syrian Chemical Weapons production. The use of chemical weapons by Syria on August 21 has intensified the debate surrounding the Syrian chemical weapons stockpile. It will be a wait and watch situation for the Syrian promise to join the CWC. Meanwhile, reports suggest that the UN has received documents from Syria towards joining the CWC.

Immediately after the August 21 incident, the US had decided to launch the aerial strikes on Syria as if they were waiting for such a disaster to happen. In past Libya was attacked similarly. The US administration was very clear that they would not commit their ground forces and only undertake aerial attacks. It was obvious that for the US, Syria does not matter much and actually, they wanted to send a message to Iran that they would never accept any nuclear adventurism. However, unfortunately, for the US the entire plan got ruined. Immediately after the August 21 incident, the British government thought that their time in history has come to announce to the rest of the world they are the real custodians of global morality! They backed the US for a military attack but their proposal got defeated in their own parliament. US President Barak Obama tried to make a case for the necessity of military action in the G-20 summit, but could only manage the support of half of the G-20 members. France was staunchly supporting the US but not sure that their political system could support their action. All this made US President very cautious and he soon realized that in democracy, citizens of the US have the right to participate in making policy and people’s opinion was unlikely to favour this thinking. All this eventually made the most powerful man in the world cave in.

When all the above drama was being enacted in the Western Theater, one man was silently waiting in the wings, to strike at an opportune moment. With the Syrian issue started getting hotter Russian President Vladimir Putin had unperturbedly dispatched more warships to the Mediterranean. He gave an extremely cold welcome to Obama when he had arrived for the G-20 summit in St. Petersburg. He strongly opposed any unilateral action in Syria, without the UN mandate. He asked the Western block to provide credible evidence for the involvement of the Assad’s regime in launching chemical weapons attacks on their own population and finally wrote an article in the New York Times directly challenging the consonance of US citizens. He also realized that Mr Obama is looking for a face-saver and quickly offered one by saying that Syria should commit to surrender their chemical weapons. The US President had no option but to grab this opportunity. Subsequently, he allowed John Kerry to play to the script and also gave him some space to enact in such a fashion that the US administration would not be viewed as a loser in this deal.